Thursday, June 5, 2014
With the home of the Wright Brother’s first bicycle shop as a backdrop, Dayton will host the 20th annual World Solar Splash competition on June 11-15 at Eastwood Park. The event will bring universities from throughout the world to participate in an on-the-water competition.

Cedarville University is the most decorated participant in Solar Splash history, having won the Collegiate World Championship seven out of the last ten years. Dr. Tim Dewhurst, senior professor of mechanical engineering and faculty advisor for Cedarville’s solar boat team, led the effort to bring the Solar Splash to Dayton.  He said that having the competition in Dayton will add exposure to the world-class event and also ties in well with Ohio’s goal of advancing innovation with renewable energy sources.

Dewhurst is also planning to have elementary and middle school students at the event. He expects to introduce a Junior Solar Splash event this year, a model solar boat competition for elementary and middle school students. He said, “I hope to run this as a pilot project with a few schools this year and have the races during Solar Splash at Eastwood Park.”

The event will test the engineering design and production skills through a technical inspection and a series of on-the-water competitions. Each team is required to produce, either by building, buying, or receiving parts, a piloted boat up to 6 meters in length powered by 480 Watts of solar power with 1 kW-hr of stored energy in batteries.

Dewhurst said that Cedarville’s team is unique in how much of the boat they build themselves. He said that the team’s winning streak began with a student designed hull. Dr. Robert Chasnov, senior professor of engineering said, “The result of one student doing a design of the hull made it so uniquely perfect that it allowed our team to win. Since then, the work that the students have done is to make it smoother and faster and more streamlined.” Chasnov said other teams took notice of Cedarville’s design and replicated it. “Every time we win a competition [other teams] take pictures so that they can replicate what we did the previous year, which requires us to stay ahead by just that much,” he said. “And that’s the group of students we end up having. They have the ability to be creative, do more and make things better as they work in conjunction with the faculty.”

During the competition teams battle for the title of Collegiate World Champion by gathering points based on their performance during a qualifier, high-speed sprint race, long endurance race, and slalom event. In addition to the on-the-water races, judges review a technical report- submitted by each team. Last year, Cedarville turned in the fastest slalom time in competition history. Dewhurst said that although the boats are run by solar power and only reach speeds up to about 30 mph, watching can get pretty exciting. “Especially, if one of those boats is yours and you are just watching it inch along past the others,” Dewhurst said.” It gets tense.”

Dewhurst said that Cedarville’s success points to the excellence of the university. “I think that faculty involvement is huge. The amount of time that the faculty spend with the student is a point of excellence,” he said. “Our engineering program is very strong, and the boat is just part of the proof.”

*Changes to the schedule may occur, due to weather or other circumstances.


**Activities shown in Bold and Underlined are the major items of interest to visitors, and include the “Events” of the Solar Splash competition. 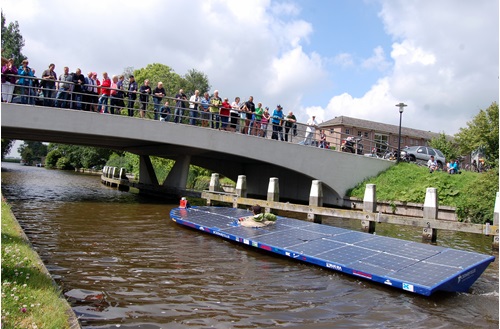