Thursday, May 29, 2014
The stereotype that women wear uncomfortable shoes to be fashionable was put to the test and found to be true by five Cedarville undergraduate pharmacy students.

Junior Emilie Bergsma (Port Charlotte, Fla.), Junior Taylor Schwartz (Story City, Iowa), Junior Christian Carroll (Hillsboro, Ohio), Junior Danielle Grear (New Castle, Ind.) and Freshman Megan Lawrence (Schoolcraft, Mich.) did research on campus with female students and faculty. The results are not surprising. The test consisted of three questions to determine whether or not the surveyor would be willing to wear uncomfortable shoes if the shoes are considered fashionable.

The data collected in April showed that 46.5% of women at Cedarville would wear uncomfortable shoes if they were fashionable. Cedarville is above the 37% national average found by The Society of Chiropodists and Podiatrists.

Out of the 619 responses the survey produced, 288 women said yes, they would wear shoes that are uncomfortable if they were fashionable, and 331 said no, they would not wear shoes that were uncomfortable even if they were fashionable. The group performed a Chi-Square test and found a p-value of less than 0.005, which means that their data was statistically significant.

Bergsma said that the group predicted that Cedarville women would be willing to wear uncomfortable shoes. “[Cedarville is] a more professional environment than most schools so people tend to want to look nicer,” she said. 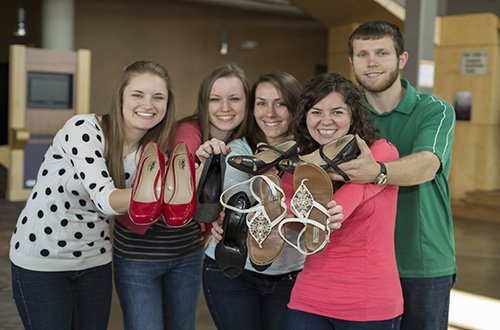 Research conducted by pharmacy students on what styles of shoes women from Cedarville University are willing to wear resulted in typical results.