Wednesday, July 2, 2014
Cedarville University’s Robotic Boat team will be spending July 8-13 in Virginia Beach. But instead of working on their tans, the four team members will be preparing their boat for the three on-the-water challenges that it will face during the International RoboBoat Competition.

The International RoboBoat Competition began in 2008 and draws universities from all over the world to compete including large schools like Virginia Tech and the University of Michigan. About 15 teams race student designed autonomous surface vehicles through an aquatic obstacle course including detecting underwater pings, navigating around buoys and autonomous docking. The events are completed autonomously by the boat through using software written by students that make use of camera images, GPS signals, and compass information. The competition is sponsored by the Office of Naval Research and by the Association for Unmanned Vehicle Systems International (AUVSI), an organization that specializes in unmanned transportation.

Dr. Tim Tuinstra, associate professor of electrical engineering, and Cedarville’s team advisor, said that the International RoboBoat Competition is the competition to enter if you are looking to do robotic boating.

The competition gives engineering students the opportunity to apply their design and production skills. “It is a very intense environment because the teams are very competitive about their boats,” Tuinstra said. “They are going to make them work. You can kind of feel the brain power at the competition.”  Tuinstra said the hands on experience that the competition provides give Cedarville engineering students marketable skills that can be applied in some very high tech areas.

This year will be Cedarville’s fourth year competing. Although Cedarville hasn’t brought home any large awards yet, Tuinstra said that each year Cedarville improves. “The first year we got a rookie of the award for an outstanding effort by our inaugural team.” Tuinstra said. “The last two years we’ve been moderately competitive. We’ve made strides every year as far as understanding how to do it. [The boat] gets passed down from team to team each year so hopefully we build on what the previous team did and learned.”

The team has added five computers to its design for the competition this year. The computers act as the brains of the boat. Tuinstra said that the team already had a laptop onboard, but the added computers will help increase the speed and navigation ability of the craft.

Two years ago, the team came within a few feet of beating Virginia Tech. Tuinstra said, “It is good for us to be right there with large name schools.”

Tuinstra said he has high hopes for this year’s competition. “Our engineering students can compete with anybody. I think that is important for the world to know.” 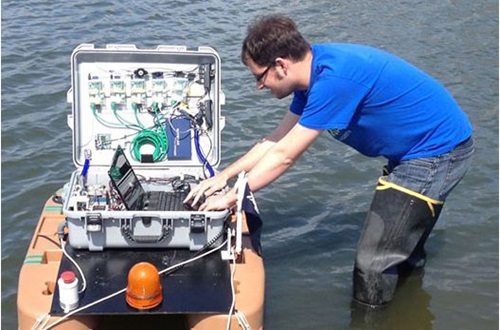 Robotics team ready to compete in the International RoboBoat Competition