Design Student Honored in HOW Magazine

Wednesday, April 16, 2014
Cedarville Graphic Design student Amy Reisenweaver was recently honored by HOW Magazine for graphic design work she created for a personal and student project.

How magazine is an award-winning design magazine for graphic designers. The magazine offers several design competitions each year to give designers a chance to have their work viewed by potential clients.

Reisenweaver, a senior from South Charleston, Ohio, entered “The Insider’s Guide to the Magic Kingdom Booklet”—a personal interest to her—and a promotional pamphlet for the 2013 Junior-Senior Banquet held at Cedarville University. Both of the designs appear in the March issue of the magazine.

“I choose the two strongest pieces that I thought I had based on what my professors said and what I thought best represented my work,” said Reisenweaver, who just accepted an internship with Disney Theatrical Group doing graphic and theatrical design in New York City.

Reisenweaver said that she heard about the competition over the summer and decided to apply. “HOW is the most popular graphic design magazine, for graphic designers,” said Chad Jackson, director of marketing services at Cedarville University. “It’s very well respected when it comes to design trade publications, so it’s a big honor to be in there especially as a student.”

“Just being able to put that on my resume and say look, I’ve had two pieces gain recognition and respect from a very well-known magazine will help,” Reisenweaver said. She credits Cedarville with helping her develop the skills she need to enter and win recognition in the magazine.

“For design, part of it is natural abilities and talents and having the mindset for it,” Reisenweaver said. “But a big part of it is having the technical skills and Cedarville has really helped with those.”

After graduating in May, Reisenweaver said she plans on returning to her home state of Florida and then hopes to work for a design firm, but until then she said, “We’ll just see where God takes it.” 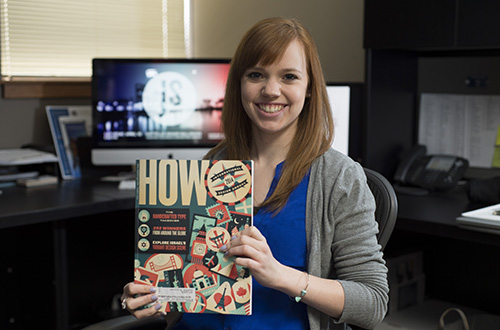