“I feel incredibly blessed to be able to share my Christian worldview on history and society with Christian young people for the last 50 years," said Murdoch. "I love the students I am privileged to teach, and I love doing it at a university that stands boldly for ‘The Word of God and the testimony of Jesus Christ.' "

Teaching has always been a passion of Murdoch. Soon after he earned his doctoral degree in philosophy from Northwestern University, he joined the Cedarville faculty. Murdoch currently teaches courses in social movements, reflecting his “lifelong desire that peoples of all races find an open and loving reception in Bible--believing institutions.”

Along with teaching, Murdoch is the author of several books. These include “Portrait of Obedience: The Biography of Robert T. Ketcham,” and the 125-year history of Cedarville University. Ketchum, according to Murdoch, is a friend whose faith in God allowed him to overcome the loss of his eyesight and become a leading figure in the Baptist separatist movement in the middle 20th century.

He is also an accomplished collegiate tennis coach. At Cedarville, Murdoch’s teams’ recorded 563 wins during his 29-year career, including 88 consecutive dual-match victories, both records at the University. Under his leadership, Cedarville’s men’s team claimed 23 National Association of Intercollegiate Athletics (NAIA) District titles and 23 Mid-Ohio conference championships. In 1989, his team finished eighth at the NAIA national tournament.

Murdoch remains active in the tennis community as a member of the Intercollegiate Tennis Association (ITA) and board of director, and he is recognized in the NAIA Hall of Fame.

His wife of 56 years is Ruth Mary Murdoch. They have two sons: Jim and Mark. The Murdoch’s have four grandchildren. 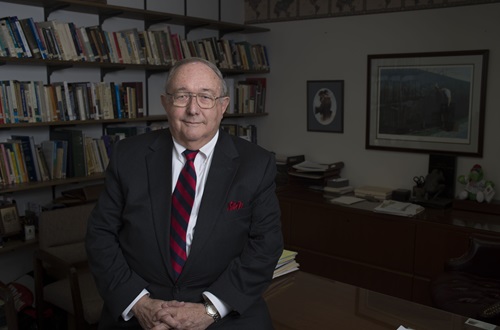