Six students, Daniel Andrews from Blue Mound, Ill.; Jonathan McClain from Xenia, Ohio; Jonathan Proctor from Elmhurst, Ill.; Matt Schoenwald from Chardon, Ohio; Josh Sommers from Kennewick, Wash.; and Jay White from Schenectady, N.Y., placed into two teams for the competition, traveled to Cincinnati to compete against 126 other teams from 61 different schools. The competition usually consists of eight to 10 problems that must be solved within a set amount of time. This year, teams were given nine problems to solve and submit within five hours. The competition also measures and rewards the speed at which teams solve the problems, adding penalty minutes for incorrect and unsolved problems.

Cedarville’s top team placed eighth overall, which is the second best placing in the 13 years since the school began competing. The school also placed as the top Ohio team for the second year in a row and the fifth time in the last seven years and was once again the top Council for Christian Colleges and Universities school in the region. David Gallagher, coach for the team, said when the scores were announced, the local contest director introduced the team by saying, “It should come as no surprise to anyone that our top team is from Cedarville University.”

Schoenwald, a senior, said he was sad that it was his last year competing, but said that he was excited to see continued improvement at the competition this year.

“It’s rewarding to compete that well against other schools,” he said.

Gallagher said the success is significant to the university and computer science program, but it is most important to recognize the students’ hard work and success.

“I’m really proud of the kids,” he said. “They were excellent not only in how they competed, but in the way they conducted themselves.” 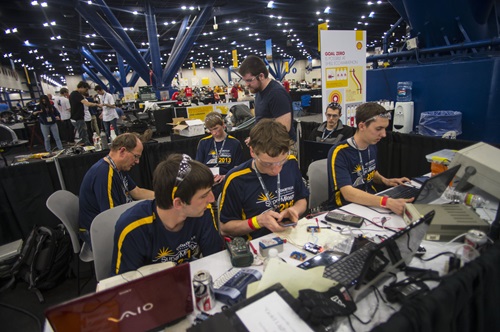