As Kevin Roper, Ph.D., associate professor of mathematics, scans through the Cedarville Township Volunteer Fire Department (CTVFD) membership roll, it quickly becomes apparent that those who don’t have some connection to Cedarville University are the anomaly in those ranks. “Alumnus, alumnus, current student, alumnus…,” says Roper as he reads the list.

Currently, there are 55 members in the CTVFD, and according to Roper, 50 of those members have connections to Cedarville University—including 27 current students. The others graduated from or have some other connection to the university.

“If you call 911 in this area, it’s probably a current student or alum who is going to show up at your door,” Roper said.

This tight connection between the two organizations isn’t a coincidence. According to Roper, those who have some connection to the university regularly make up the majority of the CTVFD ranks.

Roper is just one example of how quickly one can become a part of the department’s culture. He began volunteering at the CTVFD in 2005 after a student mentioned to him that the department needed more local volunteers. He decided to give it a chance, thinking that he would keep his involvement low key.

Eight years later, he’s a well-established regular in the department: a lieutenant. “I didn’t intend to go that high,” he said with a laugh. “It’s taken over my life. You get involved more and more.”

Roper’s story is not unique. Many more throughout the years have come from Cedarville University to the department with similar expectations and have become engrained in the culture.

Ashley Short’s involvement in the department started on a whim, when she decided to visit the firehouse for fun. For Short, a senior student from Bend, OR, it didn’t take long for her initial contact at the department to turn into something more. Today she’s one of the first to run into situations most people run away from. Whether it’s a burning building or vehicle, a patient on the edge of death or another dangerous emergency, she’s ready to jump into action at a moment’s notice.

“Whenever we respond to a call, we put our lives in the hands of our fellow volunteers and this creates a tight bond,” she said. “Whenever we enter a burning building, or walk into a stranger’s house to care for a sick or injured person, we put our own lives at stake. We carry additional stress from this job, but we bear it with joy.”

The call comes at 8:57 p.m., a time when most in the town of Cedarville are relaxing for the evening, perhaps beginning to think about their plans for the next day. As their black pagers go off, signaling a need for medical personnel somewhere in the area, each of those who are connected to the department know that it’s time to do what they do best, regardless of the time, circumstances or conditions: serve others.

Those who are available rush to the department. Those closest to the station prepare the department’s emergency response vehicles while others pull into the parking lot and hurriedly prepare to go out on the call.

Another call comes in from the department chief, Scott Baldwin, who is already on the scene: “One car, rollover, four injuries,” he says. As the sounds of individuals in pain resonate out in the background of the call, the chief calls for any available medics to respond to the scene.

Shortly after this call goes out, the cavalry arrives on the scene: a dark, narrow, country road. Their lights illuminate the scene where a heavily damaged car sits flipped over in a field. Nearby three groups of emergency medical technicians huddle around patients who have been injured in the rollover. The volunteers work quickly in the cold evening air and soon the scene is cleared.

As the patients are sent off to receive further medical care, the groups of department volunteers eventually disperse, returning to their schoolwork or beds, and the scene returns to its natural, quiet state, as it was just hours before. The CTVFD has done its job once more.

Once they get involved with the fire department, it’s hard for Cedarville students to stay away, even after they receive their diploma from the university. Rick Marriott is one such example of a student who just couldn’t stay away. Even after graduating from Cedarville and moving on to medical school, Marriott came back for a summer just to be involved with the department.

Even when he talks about the department today, it’s apparent that he might not be quite done serving there just yet. “The department is like a family,” he said. “I’m sure I’ll be back in the future. Hopefully one day I’ll be able to serve with them again.”

While the faces may change from year to year, the strong connection between Cedarville University and the Cedarville Township Volunteer Fire Department remains resilient because of the strong sense of dedication that those on-campus have to the community in which they reside. Those from the university provide a valuable service to their community through their tireless work. According to Kyle Miller, the department’s assistant chief (who himself is a ’98 grad), the students help to keep the department fresh and vitalized through their energy and new perspectives. 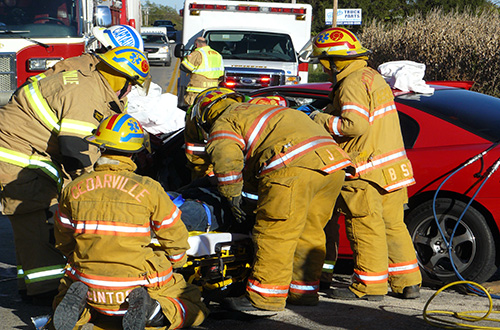 The connection between Cedarville University and the Cedarville Township Volunteer Fire Department is strong once again this year.