Faculty and Staff of the Year Awards

Friday, May 9, 2014
William Ragle, Ph.D., associate professor of finance, and Becky Stowers, dean of women, were recently awarded Cedarville University’s Faculty and Staff  of the Year awards. These awards are among the highest awards given to faculty and staff and are conferred by the Student Academic Advisory Board (SAAB) each year.

Dr. Ragle, who received the Faculty of the Year award, has taught finance at Cedarville for the past 19 years. He earned his doctoral degree from the University of North Texas, and he is also a certified financial planner (CPA).  Prior to becoming a professor at Cedarville, Ragle worked as a financial analyst for Texas Instruments and owned a construction company.

Stowers was awarded the Staff Member of the Year award for her outstanding work in encouraging and supporting students during the 2013-14 academic year.

Stowers earned a bachelor’s degree in nursing from Cedarville University in 2001 and has worked in student life since 2002. She served as the RD of Faith Hall for nine years, balancing her job at the University with a nursing position at Dayton Children’s Medical Center before being named the dean of women in 2011.

The Faculty and Staff Member of the Year awards are entirely student chosen. Eligible faculty and staff members are those who have served at the University for a minimum of five years and have not previously been recognized for these awards. 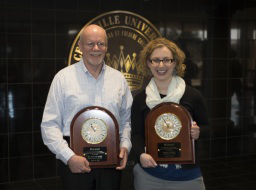