Thursday, January 23, 2014
Trina Jones, a freshman at Cedarville University, entered Ohio foster care at age 2. Sixteen years later, she aged out of the system and found herself homeless.


Jones had become a Christian at age 17 and was attending A House of Prayer (AHOP) church in Xenia. A year after her emancipation, a family in the church told Jones they wanted to adopt her. Since she was too old for legal adoption, Jones said the couple made a promise before the church. They pledged to care for her as a daughter, and she took Jones as her last name.

Jones continued her involvement with AHOP and began working with the church’s college ministry. “I wanted to help other college students,” she said, “even though I thought I would never go to college.”

Last September, Jones attended a Cedarville chapel program with AHOP’s college ministry leader. After the service, Jones approached Cedarville’s new president, Thomas White. “I don’t have the money to come to your school, but I believe God wants me here,” Jones said.

White encouraged Jones to apply, and she was accepted to Cedarville in November.

Jones was working as a pharmacy technician in Xenia but continued to attend chapel and talk with staff and administrators. “I was here constantly,” Jones said.

Kim Jenerette, executive director of financial aid, said the University had already begun plans to fulfill White’s vision for a Foster Home Scholarship, which he introduced shortly after becoming president in July. Jenerette said the scholarship was set to begin in fall 2014, but the University moved it up to allow Jones to begin in January.

The new scholarship provides full tuition, room and board for four years, minus $2,000 per year that recipients can pay off through work study.

Jones is now enrolled in the social work program, lives on campus and continues to work in Xenia. In the future, Jones said she wants to open an orphanage to help children who are beyond most people’s reach. “I want to follow God and his will for my life, even if it’s hard,” Jones said. 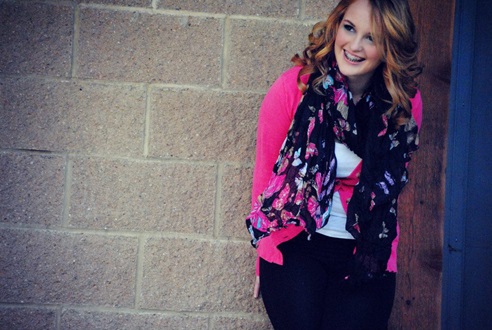 Trina Jones is excited about her college years at Cedarville University.