Friday, May 23, 2014
The Creation Museum in rural Cincinnati (Hebron, Ky.) will display the bones of Ebenezer, a world-class Allosaurus specimen on Saturday, May 24. The remains of the dinosaur were excavated from the Morrison Formation of northwestern Colorado.

As typical of most dinosaur skeletons, not all of the bones were found. The head was 97 percent complete, making it one of the most exceptional skulls of this species.  This particular Allosaurus  measured 30 feet long, 10 feet high and weighed almost 2 ½ tons. Theropod dinosaurs, including Tyrannosaurus Rex, had mouths full of long sharp teeth—a characteristic also displayed in the skull of Ebenezer.  The Allosaurus skull is narrower and lighter than the much bigger T. Rex.

John Whitmore, Ph.D., professor of geology at Cedarville University, was invited by Dr. Andrew Snelling of the Creation Museum to investigate the collection site in Colorado. Dr. Whitmore brought seven advanced geology students from Cedarville to help with the work. The work in Colorado, which allowed the students to learn more about the rocks where the dinosaur was found, provided a better interpretation of how Ebenezer was buried.

According to Whitmore, the rocks in northwestern Colorado where the dinosaur was discovered were very similar to the rocks of the famous Carnegie Dinosaur Quarry, located in Utah--the home of Dinosaur National Monument.  Many specimens from this quarry were excavated in the early 1900’s and put on display in the Carnegie Museum in Pittsburgh.

“Ebenezer was buried in a site filled with sandstone and volcanic debris,” said Whitmore. “Other dinosaur bones, probably from Stegosaurus and Apatosaurus, were found still entombed in the rock at the site.”  Based on the characteristics of the rock, Whitmore believes that huge mudflows (common phenomenon from volcanoes, such as Mt. St. Helens in 1980) came from a volcanic region somewhere west of the site and were responsible for the burial of many of the dinosaurs in this particular rock layer.  Mudflows form as volcanic ash mixes with water or melted snow and ice to make volcanic mud.

“The burial processes that have been discovered may explain why large carcasses are rarely complete,” said Whitmore. “In the process of a mudflow, big carcasses would get ripped apart, but things like limbs, tails and heads should remain fairly intact.” 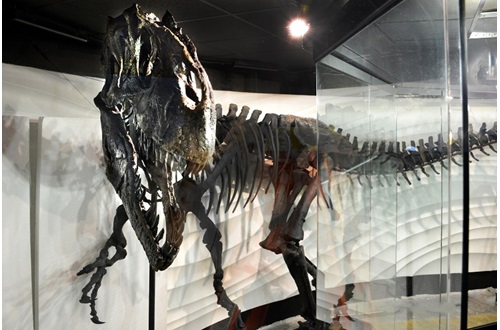 The Creation Museum will display the bones of Ebenezer, a world-class Allosaurus specimen on Saturday, May 24.