Going National with Calling and Conviction

Regionally acclaimed by U.S. News & World Report as the fifth-best college in the Midwest, why would Cedarville University feel compelled to embark on its first national — and arguably, most aggressive — advertising campaign in school history? Because it has a great story to tell and it wants more people to hear it.

During Cedarville’s historic 126 years, the University has never built an advertising campaign the size and scope of the plan that will launch on October 7. Clearly, it’s a new day at Cedarville University.

The goal of the campaign is to increase awareness of the University so enrollment continues to increase. For the past five years, Cedarville has experienced record student enrollment, including this year’s 3,459 students enrolled in undergraduate and graduate programs. Nationally, this is atypical since many Christian universities are experiencing declining enrollment numbers.

Even with record enrollments, University officials believe it has remained too quiet in telling its story of how students benefit from the academically rigorous curriculum within its Christian foundation. With assistance from Schupp Company, a leading marketing communications firm in St. Louis, Cedarville University will unveil its “calling and conviction” comprehensive advertising campaign today.

“We have an exciting story to share with Christian students across our country who are making college choices,” said Janice Supplee, vice president for enrollment management and marketing. “We are being bold about communicating the value of a Christ-centered education that is academically rigorous and developed for a gospel purpose. We will introduce our story to individuals who are serious about their faith but also want an outstanding education. Both are achievable at Cedarville University.”

Cedarville began discussing campaign goals for the national awareness campaign in May but decided to slow down the process as it waited for the announcement of its 10th president, Thomas White, Ph.D. He began his role as president on July 1, and he’s been very supportive of the campaign initiative and message.

During the presidential transition, public relations and marketing professionals at the University aggressively searched for the right firm to work with the University. A detailed Request for Proposal (RFP) process uncovered six firms with the capability of handling the campaign. These firms came to campus and, ultimately, Schupp was selected based on its expertise and proven record of building and enhancing national brands. These include Cardinal Health, American Express, Enterprise Rent-A-Car, Equifax, Missouri Baptist University, and the St. Louis Cardinals.

“The benchmark of our national campaign will be the schools and churches that send students to Cedarville,” said Mark D. Weinstein, executive director of public relations and the coordinator of the campaign. “We are investing a great amount of time and financial resources into this advertising campaign, and even though other schools may spend more money than we will, I believe our strategies will prove to be wise and position us for a great result.”

Cedarville’s leadership on this project is expecting the University’s brand to increase in stature as a result of a “border-to-border” campaign. The primary media elements are digital, radio, and out-of-home advertising. The prime audiences nationally are locations where high schools and churches fit with the University’s mission and have historically sent students to Cedarville. The prime traditional radio markets are Cleveland, Columbus, Cincinnati, Grand Rapids, Mich., and Nashville. iHeartRadio and Pandora will be used to capture the national landscape.

“What makes a brand great is when you can tell a story, make a promise and back it up,” said Jim Mayfield, executive creative director of Schupp Company. “Cedarville’s story is about not compromising. It is intentional and rigorous in its academic approach to inspire students to achieve success in all aspects of life, including their faith. The campaign illustrates the duality of the Cedarville experience in a way that is relatable and inspirational to the audience. We are confident this campaign will make a prospective student feel something genuine and compelling, which will inspire them to check Cedarville out a little closer, and once they see that story, Cedarville sells itself.” 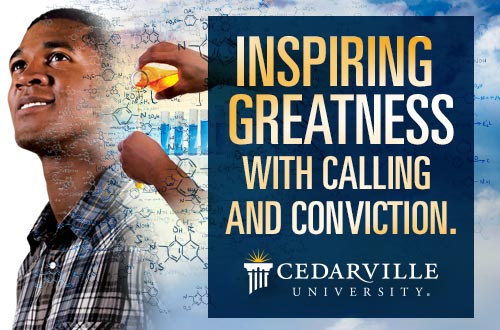