The strings are rusty and the keys are stained, but John Mortensen said a year’s work will restore a historic French piano recently donated to Cedarville University.

The piano was built in the 1870s by the illustrious Erard company and was previously housed in the home of the anonymous donor in Springfield. Safe Harbor House, a ministry founded by associate professor of educational ministries Joy Fagan, recently acquired the house and donated the piano to the University. Once fully restored, the piano will have a value up to $30,000.

Mortensen, a professor of piano, said the instrument is in surprisingly good condition. “I can’t believe it’s survived,” he said. “Usually there’s significant damage to an instrument of this age.”

But even after a century’s deterioration, the 7-foot grand piano is structurally sound — and incredibly heavy. “It’s built like a tank,” Mortensen said.

Piano technician Doug Atkins will be restoring the instrument, including its ornate woodwork, and assistant professor of music history Sandra Yang plans to trace the piano’s history.

Yang said Erard pianos are especially interesting because the company devised advances that allowed great piano composers to play with power and speed. “It’s an important instrument in the development of piano literature,” Yang said.

However, Mortensen said the instrument offers Cedarville much more than historic interest. “We’re going to play it,” he said. “It’s going to be a performance instrument, not a museum piece.”

Once restored, Mortensen said the piano will have a distinct tone and provide an accurate period instrument for students to play. “It’s totally different from how a modern piano works,” he said.

Next year, Mortensen said the University will host a debut event to unveil the finished instrument. 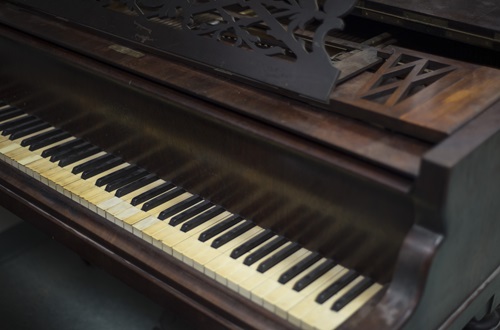