Omega Mu, Cedarville University’s chapter of the National Political Science Honor Society, Pi Sigma Alpha, has launched a new lecture series on campus this Spring named after Senior Professor of History, Dr. J. Murray Murdoch.  The series will be known as the Murdoch Legacy Lecture series.  Dr. Jewerl Maxwell, faculty advisor for the organization, says that the students decided to name the series after Dr. Murdoch because of his 48 years of investment in students at Cedarville to date.

The idea of the lecture is to honor professors who have given 20 or more years of service at Cedarville.  They intend to ask a different professor to come and talk about their life and service each semester.  The series began this Spring with Dr. Murdoch presenting the inaugural address.  He talked about his faith journey and the process of how he came to teach at Cedarville.  He also discussed some of the challenging issues he has faced in his career.  Those times involved the debate over the creation position of the school, the issue of racial diversity, and growing pains at Cedarville.  Through it all, Dr. Murdoch highlighted the importance of the university’s unwavering commitment to the Word of God and the privilege he has had of teaching and mentoring generations of students.

Omega Mu has inaugurated a new tradition with this lecture series and the campus is the beneficiary.  It is particularly fitting that they decided to name the series after our very own Dr. Murdoch.  We are blessed by both. 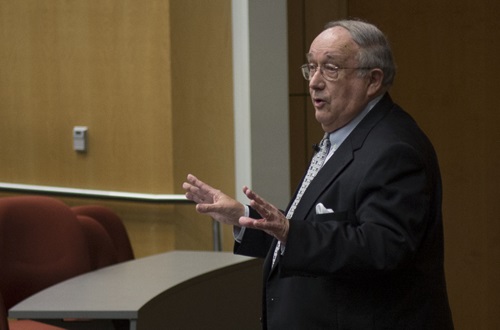