Tuesday, February 4, 2014
Cedarville University’s Academic Enrichment Center (the Cove) celebrates its 10th anniversary of providing students with academic support. Most recently, the Cove was endorsed by NCAA Division II governance contractor Jill Willson for its commitment to the student-athlete.

“The Cove is absolutely one of the best academic support programs in the world of NCAA Division II; it’s one of a kind,” said Willson, who visited Cedarville’s campus throughout its pursuit of NCAA II status. Cedarville became an NCAA II institution in 2012, joining 315 other Division II schools.

In addition to gaining confidence from the NCAA, the Cove is receiving acclaim from a variety of private and public colleges and universities. Several representatives from other universities have contacted Kim Ahlgrim, associate dean of the academic enrichment center, about Cedarville’s program and have scheduled campus visits and consultations.

Willson believes the Cove will be a model for other schools in the NCAA Division II and III. “Over and over I’ve told people at colleges and universities, ‘If you want a good academic support center, talk to the Cove at Cedarville University,’” said Willson.

When the Cove was formed 10 years ago, the staff listened to the needs of students as it created a system to best serve Cedarville’s student body. This careful attention to detail continues with the current team of professionals.

According to Ahlgrim, “The Cove focuses on celebrating each individual and giving students the tools they need to achieve success.” The Cove goes beyond offering disability services. It gives all students, including student-athletes, the opportunity for holistic academic support.

The services offered by the Cove include one-on-one consultations, group tutoring, meetings with specialists, disability services and an online support center. With additional programs such as academic success workshops, freshman prep courses and academic peer mentoring, the Cove reaches out to students at all stages of personal and academic development.

Ethan Dewhurst, a sophomore all-American soccer player from Springfield, Ohio, has received remarkable support from the Cove during his two years at Cedarville. After Dewhurst missed a full week of classes due to surgery for a sports-related injury, the Cove worked with his professors to postpone deadlines, reschedule exams and smooth his transition back to school. With an intense soccer schedule, Dewhurst has continued to use many of the Cove’s services.

“The Cove’s work and assistance has been a huge help to me during my time here at Cedarville,” said Dewhurst. “They go above and beyond to do anything they can to help me succeed in both school and soccer.” 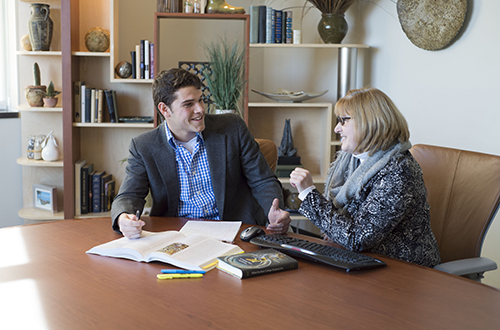