While Cedarville is one of the smaller schools that attended the event, the team showed it could compete with the best in world. “Cedarville is as good as anybody there,” said Frank Jenista, Ph.D. Jenista is a professor of international studies at Cedarville and served as an American diplomat for 25 years.

The final rankings are based on how accurately individuals and teams are judged to represent their country’s interests. Throughout the four-day conference, NMUN staffers observe and score teams on both their performances and also the final outcomes and resolutions passed by the various committees. Delegates must be in character all throughout the day, from the moment roll is called at the beginning of the day all the way to the end of their final committee meeting.

In order to assume this identity, students must do extensive preparation and research on topics ranging from economic and social developments to international relations to the environment, human rights and many others.

“Model U.N. is a real life skill,” Jenista said. “Your whole life you’re negotiating with people: your roommate, significant others, members of your family, any organization you’re a part of. The diplomatic skill is huge.” 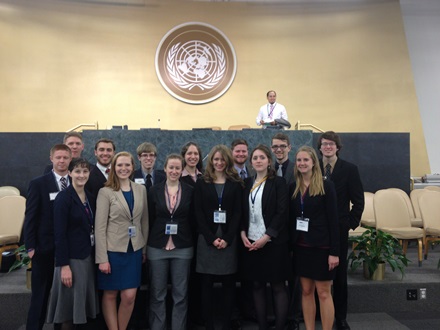