Kasandra Chambers was elected to the position by a board of student representatives from Cedarville’s region. The election process involved a three-day campaign at the APhA-ASP Midyear Meeting in Chicago, a test over the policy process, an interview with the board and speech before over 500 pharmacy student-attendees. As coordinator, Chambers is working with a team of 20 Cedarville students to organize and run the meeting. The team of students is responsible for fundraising, planning social events and soliciting companies to attend the career fair offered at the conference, which is open to students from all 23 schools in Cedarville’s region.

Chambers said she was excited to get involved in the process and hopes the experience will affect others beyond this year’s conference.

Despite the notable election, Chambers said she wants the focus to be on the chapter and Cedarville’s School of Pharmacy.

“That’s why I wanted to do it,” she said. “It’s a cool way to get the chapter involved and get pharmacy students involved in the profession.”

On a personal level, Chambers said she received encouragement from faculty and staff and the hope that this will inspire future pharmacy students to get involved.

“I really did it because I’m in the first class of pharmacy students and I wanted to set the bar high,” she said. “Years down the road, I want pharmacy students to see that we put on the event and want to do it, too.”

APhA-ASP’s meetings are the only conferences in the nation held exclusively for pharmacy students. During the meeting, students will be able to attend seminars on patient care, leadership development and resume building and get advice for working in the industry. Participating schools and chapters are also able to submit policies on changes they would like to see in the profession. Some of these policies are presented to the U.S. government for consideration, giving pharmacy students a national voice.

John Ballentine, Pharm.D., associate professor of pharmacy practice at Cedarville, said he is encouraged by the students he sees at the conference. After 25 years in pharmacy, he knows it’s much easier to not be involved, he said, and he enjoys seeing so many students interested in their profession.

“It’s very encouraging to see so many young pharmacy students being so passionate about the profession,” he said. “It’s neat to see future pharmacists taking an active role in the future of the profession.”

Chambers said it was Cedarville’s supportive environment that encouraged her to pursue the election and the work of her team that will make the conference successful.

“More than anything, I have a really good team,” she said. “And that’s what’s going to make it happen, not me.” 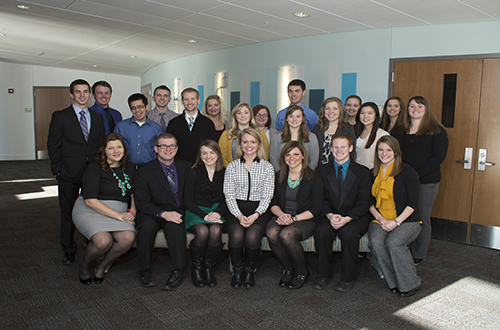