As a Capitol Hill summer intern, Derek Barnhart said he got tired of wearing a suit every day. But he didn’t need one when he joined the Republicans for batting practice at Nationals Park. Barnhart, a senior political science student from Merrillville, Ind., and an avid baseball player, was an intern for Rep. Marlin Stutzman of Indiana last summer. On the day of the annual congressional baseball game, Barnhart was invited to join Republican team warm-ups and watch the game from the dugout. Barnhart said he loved meeting and interacting with politicians like Senator Rand Paul, House Majority Leader Eric Cantor and Minority Leader Nancy Pelosi outside their work zone. “Not a single other intern on the Hill got to experience that this summer,” Barnhart said.

Barnhart was one of several Cedarville students who completed political internships last summer. Junior Katie Hughes, a pre-law student from Southfield, Mich., worked with Wisconsin governor Scott Walker. Jeremiah Rankin, a senior from Burlington, Conn., worked for the Connecticut Office of State Treasurer and Natalie Tarnoviski, a senior from Warminster, Penn., worked for Sen. Pat Toomey of Pennsylvania. Rankin and Tarnoviski, political science students, are now interns in the capital as part of Cedarville’s D.C. Semester.

Rankin was the only intern paid for his work, but each student said these opportunities allowed them to learn from politicians and public servants whom they highly respected. “Just knowing that I worked for that kind of guy was enough for me,” Barnhart said of Stutzman.

Tarnoviski, said classes at Cedarville prepared her for the internship — especially Kevin Sims’ Congress course. Tarnoviski said she encountered many situations in her internship that were nearly identical to stories that Sims, a professor of political science, had shared from his own experience. “It’s so cool to have professors who have had these real-life experiences in the field, and they left to teach us about it,” Tarnoviski said. 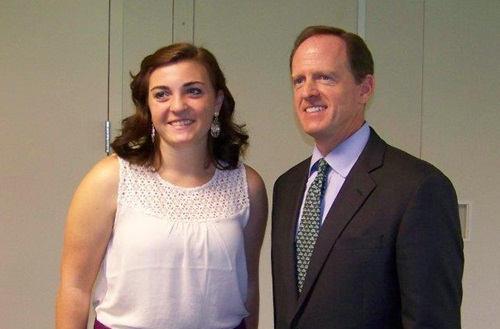