Brush, a senior from West Bloomfield, Mich., spent four months at the Institute of Gerontology at Wayne State University doing research in the Ofen lab. “It was a little intimidating at first,” said Brush. “The credentials of everyone in the lab were quite impressive.” He worked alongside professionals with advanced degrees including several with doctorate degrees in neuroscience from Massachusetts Institute of Technology and Carnegie Mellon University.

After two weeks of intensive training, Brush became a senior lab member, a position primarily given to graduate or postdoctoral students. As a senior lab member, Brush administered and scored IQ and neuropsychological assessments. He ran many Functional Magnetic Resonance Imaging (fMRI) sessions and learned computer programming languages to analyze the data collected.

In addition to his work as a senior lab member, Brush became the lab coordinator in July. His new responsibilities included training and overseeing undergraduate research assistants and recruiting participants and scheduling their assessments. As lab coordinator, Brush also worked with undergraduate students to setup research studies conducted by postdoctoral students.

Each week, everyone at the lab met for progress reports and research updates presented by one of the postdoctoral students. Toward the end of the summer, Brush was asked to run one of the weekly lab meetings. He gave a two-hour presentation including analysis of all the data the lab had collected up to that point. “This was one of the best and most nerve-wracking parts of my time at Ofen lab,” said Brush.

Impressed by the presentation, lab director and private investigator, Noa Ofen, Ph.D., asked Brush to write a paper with data analysis from his presentation. Brush will finalize the paper later this semester and will send it to Ofen for publishing in a neuroscience journal. 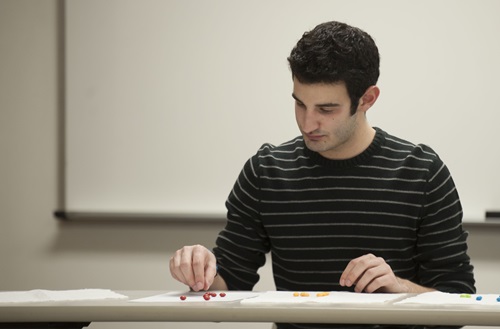