Tuesday, July 22, 2014
For the fourth consecutive year, Cedarville University’s robotics team competed in the International Roboboat Competition in Virginia Beach. From June 8-13, the team competed against schools from across the country using an autonomous boat, performing various challenges. The team received the “Biggest Bang for the Buck” award at Sunday evening’s award ceremony, which commended the team for its accomplishments as a smaller team on a low budget.

“This award, once again, speaks to the caliber of our students and their skill,” says Dr. Tim Tuinstra, an associate professor of electrical engineering at Cedarville.

The challenge of the International Roboboat Competition is to build an autonomous boat that is able to drive itself under the control of a computer system. Obstacles, such as channel flowing and autonomous docking challenged the engineering of the boat and the students minds were tested as they navigated through the maritime environment. The team spent Tuesday through Friday testing its boat and working out the technical issues to be ready for the qualifying runs on Saturday and Sunday.

“The judges we impressed with our consistency and performance in our qualifying run,” said Tuinstra. “The students represented themselves, the engineering program and the university well.”  The “Biggest Bang for the Buck” award was a $1,000 cash prize. 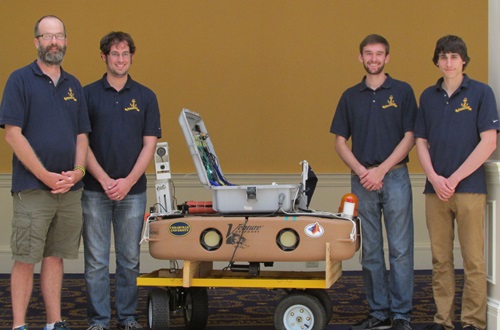