Tuesday, May 13, 2014
Cedarville University’s SAE Aero Design teams have been awarded the Greene County Achievers award for their designs and accomplishments during the 2014 SAE Aero Design competition.

The international competition requires teams to design, build and fly remote-controlled airplanes according to a specific set of rules, which change every year. Teams receive the rules in August or September and work to create a design during the fall semester. In the spring, the teams build and refine the airplanes to prepare them for the competition in April. The competition has three categories for teams to earn points – flight score, oral presentation and report – and there are three groups of competition teams can enter in – ¬micro, regular and advanced. Micro class planes are made to fold up and fit in a box and are judged on their ability to efficiently fly with a payload fraction. Regular class planes are built with size restrictions and are tested to see how much weight they can hold. Advanced class planes are developed with real-time communications with the ground and made for delivering objects in drops.

The competition features team from around the world, including students from Poland, Brazil, India and many other countries. During the event, students fly their planes multiple times, earning points for every successful flight and for the amount of weight the planes can hold.

The students’ designs were innovative and, especially for the senior team’s plane, risk-taking, Tim Norman, Ph.D., the teams’ advisor, said.

“From a theoretical point of view it had all the right stuff,” he said. “The plane ran into several problems that are typical with the design used and that’s what made the flying portion of the competition a real challenge for the Cedarville team.”

While the teams met with limited success in this year’s competition, Norman said, their attitudes were noticed by several others.

“I heard from many advisors and students that the teams were an inspiration for their work ethic,” he said. “They got the plane back in the air after crashes and pulled three successive all-nighters doing it.”

The senior team placed fourth out of 40 in the oral presentation segment of the competition but place 34th out of 42 overall. Although the teams did not win, Norman said, they left a mark. 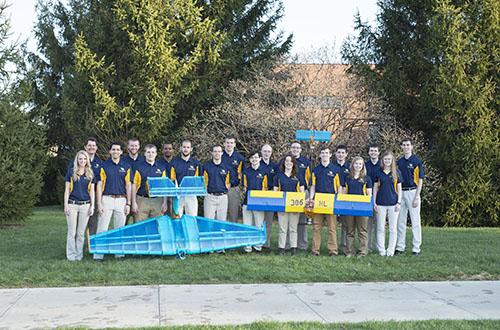