This was the third year Cedars competed and placed in the convention and the second consecutive year it has won the General Excellence Award. Winning the award, Jeff Gilbert, Cedar’s faculty advisor, said, is equivalent to being named the newspaper of the year for competing papers.

The award is given based on the number of points each newspaper accumulates from first, second or third place wins in each of 10 categories. These categories include news coverage, in-depth reporting, arts and entertainment, opinion writing, sports coverage, design, photojournalism, headline writing, best multimedia package and best website. Newspapers submit selections from the previous academic year that are judged by members of the Ohio Newspaper Association. Cedars won 10 awards in eight categories, winning in every category except opinion writing and best website and winning two awards in the arts and entertainment and headline writing categories.

Schools were notified of some of their wins in January, but the General Excellence Award winner was not revealed until the convention. A team of four Cedars editors – Zack Anderson, Lauren Eissler, Becca Kochsmeier and Mary Miller – attended the convention with Gilbert and accepted the award before the entire convention when it was announced.

Gilbert said the win was significant for the students who work on the paper and demonstrates they are doing a good job. Awards like this, he said, show that there is meaning behind the work the students are doing and that they are part of something good and successful.

“Everyone involved works hard and puts in a lot of time. They don’t do it for awards and recognition, but it’s nice to get them,” he said. “It’s an affirmation that they’re doing a good job and their hard work counts for something.”

The students’ achievement also reflects well on the university, Gilbert said, and puts Cedarville’s name out in the larger community.

“I’ve been blessed to have students working that take their jobs seriously,” he said. “I’m really proud of the students involved and the integrity they’ve shown in their work and their diligence in wanting to do a good job and work as well as they can.”

Design – a team of student staff under the leadership of Jenni Hodges, Germantown Hills, Ill. 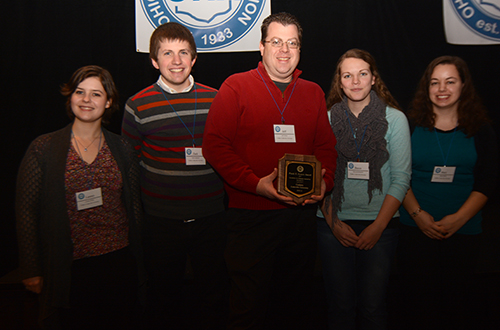