During the tournament, teams were awarded points at the conclusion of each round based on their ranking. At the end of the competition, each teams’ points were calculated with Cedarville coming in first with a total of 178 points. Southern California universities Biola University finished second with 146 points, and Vanguard University placed third with 129 points.

Excellence was a theme for the Cedarville team throughout the competition. According to Derrick Green, assistant professor of communications and forensics coach, “Cedarville’s emphasis on excellence in all areas including academics prepared this team to represent the university well.”

At the beginning of the competition, the team committed to give its best in every round regardless of the outcome. Senior theater major, Doug Malcolm said, “Our goal as a team was to glorify God through excellence in effort.”

In addition to the title of Division II national champions, each member of the team received individual awards. The five freshmen on the team competed in the novice category and won a total of ten awards. The award winners include:

Rae McKee, from Nemo, S.D., was a semi-finalist in extemporaneous speaking. 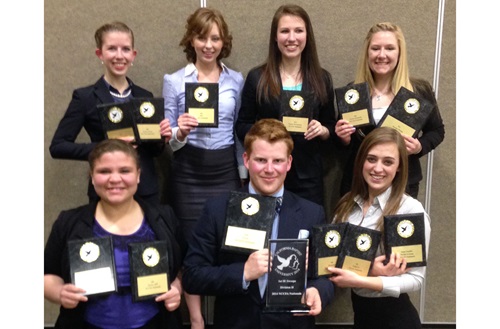