Student Chosen to Represent G-MAC on a National Level

Tuesday, April 1, 2014
A Cedarville University student has been selected as the first ever National Student-Athlete Advisory Committee (SAAC) representative for the Great Midwest Athletic Conference (G-MAC).

In her new role, Laura Farleman, a junior pharmacy major from Baldwinsville, N.Y. works to improve the student-athlete experience with the G-MAC and throughout the National Collegiate Athletic Association (NCAA).  To fulfill her responsibility, Farleman works as a liaison between institutional, conference and national SAAC’s. If an issue is raised by a student-athlete in the G-MAC, it is Farleman’s responsibility to work to resolve the issues either through connecting the student with the right person to talk to or voting at the NCAA convention.

“I was like, I don’t really know if this is up my alley, but I prayed about it and realized, if God wants this to happen it’s going to happen,” Farleman said. “It’s not going to hurt if I don’t get it.”

Farleman, member of Cedarville’s track team, found out that she was chosen for the position early in September and began her duties a week later.

“It was a very quick shift.” Farleman said. “It was exciting, different and overwhelming.”

The G-MAC became an official member of the NCAA Division II in February of 2012 and began competition in 2013-14. As the conference’s first student representative, Farleman had no background paperwork to reference. In order to complete her primary role as liaison between student athletes and the national committees, she had to make her own contacts and develop her own system for getting her voice out to the student athletes.

Farleman also credits her professors and The Cove for helping her balance life as a Pharmacy major, member of the CU women’s Track and Field team, and her added responsibilities as the G-MAC’s national student-athlete representative.

“I’ve had some of the best experiences and built some of the best relationships with my professors, who have really engaged with me beyond academics,” Farleman said. “They have helped me, if I need help in a class, find a tutor through The Cove, or previous students.”

Farleman plans to enter the school of Pharmacy in August and will continue her role as student representative for the G-MAC until the end of the January 2016 NCAA Convention. 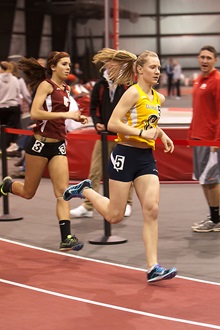