Tuesday, January 21, 2014
A Cedarville University music student has been selected to join the Intercollegiate Jazz Ensemble of Ohio.

The ensemble is composed of the top collegiate jazz players in Ohio and includes five saxophones, four trombones, four trumpets, a pianist, bassist, drummer and vocalist. The band will meet for two full-day rehearsals before performing a concert at the Ohio Music Educator Association Convention at the Columbus Convention Center on Feb. 7.

Simon Yeh, who is joining the band as an alto saxophone player while doubling on the flute, is the first Cedarville student to join the ensemble. The audition, Yeh’s second for the ensemble, required each musician to play eight minutes of the same music, a melody and a progression, and send in an audition tape to be evaluated.

“Many of the competitors were from large music schools, including the Cincinnati Music Conservatory and Ohio University, schools that are more involved in the music community,” said Yeh. Coming from Cedarville, a university that is not as interwoven in the community, Yeh lacked a competitive edge that some of his competitors had through their connections within the music world.

Regardless, he was selected for the ensemble and will perform with the top collegiate jazz players in Ohio.

Beth Porter, chair of Cedarville University’s music and worship department, said “Simon has great natural talent and is someone who could have gone to any school he wanted based on his musical abilities.”

“He’s naturally gifted, but a hard worker,” she said. “It’s been fun to watch him grow and work, even though he came in with a lot of ability. He hasn’t sat around or coasted. He’s worked really hard.”

Yeh said he has been playing the saxophone for eight or nine years and also plays the flute, clarinet and piano. Though the ensemble is a great honor, he said, it serves most importantly as a starting point for his musical and professional future.

“In this business, it’s all about how good you are and the people you know,” he said. “To be in something like this, it’s just the beginning. You meet other esteemed musicians. It’s how you get in the system and make a living.”

Yeh said he hopes to continue in the music world through performing and recording, with the next step being graduate school in a large city such as Nashville, New York City or Los Angeles. The main thing, he said, is to be performing, meeting people and building a community, through which he hopes to reach others.

“The best thing a musician can do is educate and inspire young musicians,” he said. “Through performing, I hope I can educate and share through music.” 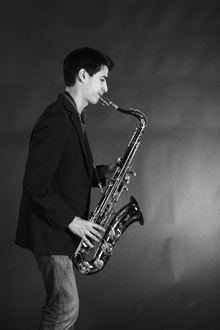 Simon Yeh, a Cedarville University music student, will be performing with the Intercollegiate Jazz Ensemble of Ohio at the Columbus Convention Center on Feb. 7th.