The team of Gregory Dickert, Neola Putnam and Caleb Wagner was honored August 1, 2014 in an IHS online press release. Another honorable mention went to the Massachusetts Institute of Technology (MIT), and Australian Maritime College won the Mandles First Prize.

The team entered a school of engineering capstone project that greatly advanced previous efforts in the design, manufacture and articulation of hydrofoils. Dickert and Wagner worked mainly on designing a lightweight carbon fiber hydrofoil for controlling flight and a manufacturing process. Putnam also contributed to the design and analysis of the project and was instrumental in the submission process for the competition. “Neola did a great job putting the report together and tailoring it to the specific competition,” said Dickert after receiving the award.

Hydrofoil boats use a ‘wing-like’ structure to lift a boat out of the water, decreasing drag and, therefore, using less energy to go faster. “This year we will continue to work on this design with a new team. Our goal is to race in the Netherlands in 2016, and hydrofoil technology is critical in foreign competition,” said Timothy Dewhurst, senior professor of engineering and advisor to the students. 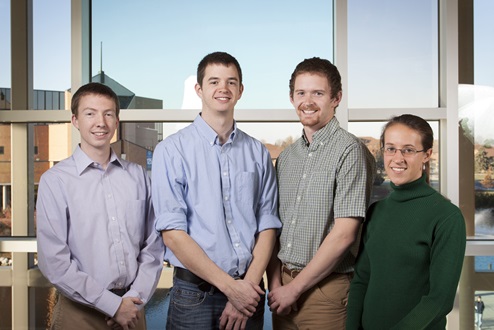