Thursday, February 13, 2014
Cedarville University students made a big commitment to future student missions trips at last month’s missions conference in the Dixon Ministry Center. The students, along with contributions from faculty and staff members—and matched by the University—contributed more than $25,000 for students going on missions trips this year.

The contribution is one of the largest offerings from any campus missions conference in the University’s history. The money, which typically is used to offset the conference itself, is being given to student trips because Dr. Thomas White and the administration believe so strongly in these purposes. “As an administration, we just said, wouldn’t it be great if the money given goes toward students going overseas?’” said Jon Wood, vice president of student life and Christian ministries. “So we found a way to cover the costs (of the missions conference) from the budget so we could give the money to the students.”

Thomas White, president of Cedarville University, presented the idea to the student body on the first night of the conference. And, Wood said, the results were astonishing.

“After the first night,” Wood said. “students had given as much as we would get in two nights the previous years.” The conference is a three-day event. The following night, White challenged to the student body. If they could raise $10,000 by the end of the conference, a faculty member would give an additional $1,000 to the effort.

“If a faculty member in the school of business would anonymously commit to sending students overseas, it says that the faculty have a kingdom mindset and want to serve students,” Wood said. “It’s incredibly encouraging.”

On the final night of the conference, White announced that over $12,000 had been given. As a result, the University matched the offering, bringing the total to over $25,000.

“It was initiated by the generosity of the students,” Wood said. “And because the students responded so well, the University wanted to support that response.”

Several missions trips are taken by Cedarville students, faculty and staff every year. This year, Wood said, the University plans on sending 200 people in 20 teams around the world. Until this year, he said, each individual has been responsible for raising the funds for the cost of each trip. Now, the money from this year’s missions conference will aid in the expenses. 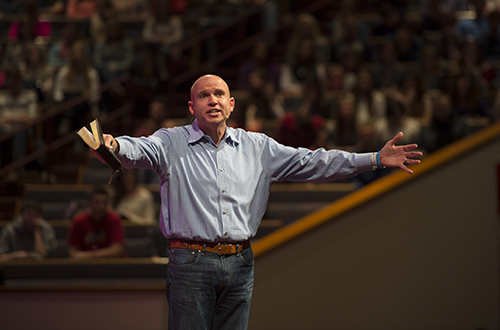 Nathan Lino, pastor of Northeast Houston Baptist Church in Humble, Texas, spoke at the 2014 Missions Conference, where students, faculty, staff and the University gave over $25,000 to missions trip support.