The annual competition is open to freshmen and sophomore engineering students and requires the team to build and program a robot to complete a specific task. The team is judged on the robot’s performance and a poster presentation where they present their work and answer questions from competing teams. This year, the robots were required to collect orange golf balls, representing Atlanta’s Georgia peaches in the competition’s location-themed tradition. Cedarville’s team was the only one to successfully gather all 12 balls in each of four rounds and, combined with an impressive poster score, won first place by 127 points, one of the largest margins in the competition’s history.

The team was comprised of 14 freshmen and sophomore students who worked three hours every Saturday morning from August 2012 to May 2013 to build the robot. Two additional weekends during the summer were devoted to finishing the robot in time for the competition because of the difficult design.

“This was probably the most complex design we have ever made,” said Clint Kohl, professor of computer engineering and the team’s faculty advisor.

The team encountered some difficulties at the start of the competition, requiring hours of mechanical and software modifications the night before. Even so, the team was ready in time to perform and win despite the complications.

While the victory is important and exciting, Kohl said it is not what the competition is really about. “Winning is just frosting on the cake,” he said. “It’s really used to develop students into better professionals and members of a team, using their gifts and talents to represent Christ well.”

Next year’s competition will be held in Indianapolis, Ind., where teams will compete by racing their robots around a miniature track in honor of the Indy 500. Cedarville plans to compete again next year, said Kohl, and hopes to perform as well as they did this year. 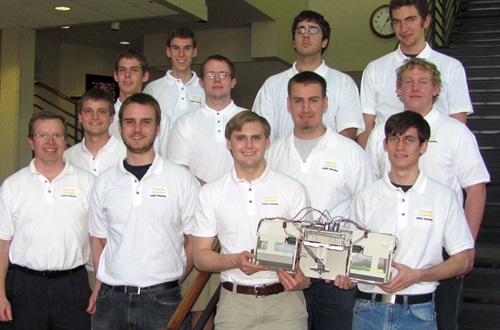