Tuesday, February 4, 2014
Cedarville’s Society of Engineers Aiding Missions (SEAM) and a group of business students have joined together in the “Liberia Lights” Project.  This work involves creating and distributing solar-powered lights to pastors and seminary students in Liberia.

A civil war that began in 1989 in Liberia wiped out the country’s power grid, and it has been a long process of rebuilding. This means that there is limited electricity, especially in rural areas. The engineering students from SEAM have been building and distributing the solar-powered lights in Liberia as a part of a missions trip, on which they have distributed the lights to Liberian pastors and seminary students. The lights allow them to be productive at night after the sun has gone down.

Through their missions trips over the past few years, SEAM has witnessed a great marketing opportunity for turning these lights into a viable business in Liberia. The students approached Cedarville’s school of business administration to see if its students would be willing to help put together a business plan for selling the lights.

And, that is exactly what happened. The business students created a plan for selling the lights in Liberia as part of an Applied Leadership course. SEAM currently has approximately 30 lights built and ready to ship to Liberia as part of a test run to determine whether their contacts in Liberia will be successful in selling them. If it does prove to be a successful venture, the business and engineering students plan to continue this ministry by producing more lights to be sold to Liberians. The profits from the sales will be given to the pastors and seminary students who need both lights and money to increase their work capacity and further the kingdom of God.

According to Dan Wright, a senior Finance major at Cedarville, who is involved in this project, the courses offered to business students have proved to be great preparation for this project. In particular, the Integrated Business Core (IBC) practicum was extremely valuable to Wright in preparing him for his involvement in this project. The practicum taught students the process of creating a business plan, brainstorming creative ideas, and starting a profitable business.

The students believe the practical use of their business and engineering academic skills have been extremely helpful in assisting their support of missions in Liberia. They hope it will prepare them more effectively for careers and missions work in the future. “I would love to see it continue to be an integration of business and missions,” said Wright. 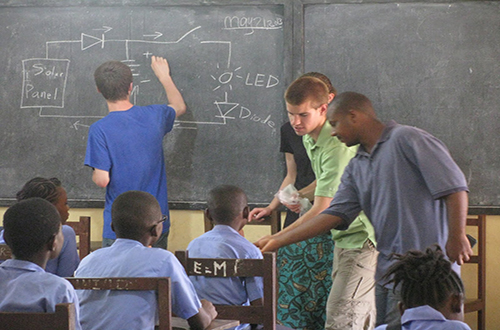 Engineering and business students from Cedarville University have partnered to turn a ministry that creates solar-powered lights and distributes them to Liberian pastors and seminary students into a viable business.