Friday, January 24, 2014
Cedarville University’s Student Government Association (SGA) H.Y.P.E. committee is attempting to break the record number for the most people dressed as superheroes in one room for the Guinness Book of World Records. This “superhero night” will take place on Saturday, Feb. 1, in the Callan Athletic Center when Cedarville hosts Central State University in men’s basketball. Tip-off is slated for 7:45 p.m.

The current world record for the most people dressed as superheroes is 1,580 people, held by Paramount Pictures. The record was achieved in an event organized to promote the DreamWorks movie “Megamind” starring Will Ferrell, Brad Pitt and Tina Fey in Los Angeles on October 2, 2010. In order to break this record, Cedarville must have more than 1,580 people dressed in a full, head-to-toe costume of a recognized superhero that has been used in a published comic, television program, film or book together in the gymnasium.

The goal of H.Y.P.E. (Helping You Promote Events), is to get students involved in on-campus events, such as theme nights. “It’s a fun excuse to dress up in costume,” said Ryan Frantzis, chair of the H.Y.P.E. committee. “Even though we’re 18 to 22 years old, we’re still 4 years old at heart.”

Cost: Free for Cedarville student, faculty, and staff / $5 for students not from Cedarville 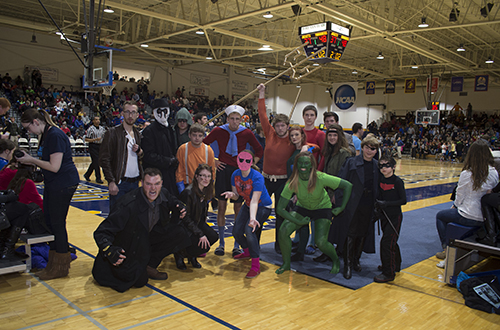