This year, SEM was held in the city streets of Houston, Texas. An entire city block served as the racetrack. Teams were required to drive 10 laps around the 0.6-mile block in less than 24 minutes. Before the race, officials filled the 100- ml (3.3 oz.) fuel tank with 89 octane Shell gasoline. After the race, they measured how much fuel it took to refill the tank.

Driving on city streets was a new experience  for all of the teams, especially since the cars do not have suspension systems to absorb the bumps in the road. With sharp turns at the corners, at least nine teams rolled cars during the race — including Cedarville. This was the first time in the team’s 19-year history that Cedarville had ever rolled a car during a race. Since Supermileage cars are designed and built well, featuring roll bars and five-point seatbelts, no one was injured during the accidents. The team spent the evening gluing the crack in the canopy and sanding out the scratches in time for the next day’s race. The team also competed at the SAE Supermileage competition at the Eaton Proving Grounds in Marshall, Michigan, in June. Cedarville entered its two vehicles in this event, but Slipstream encountered setbacks. One of the bolts that held the starter motor together came loose during the race, preventing the driver from restarting the engine.

When racing, the driver uses a “burn and coast” method. Drivers typically run the engine for 10 seconds to get the car up to 20 mph and then coast down to 10 mph to reach an average of 15 mph, the minimum average speed required for competition. To get the best gas mileage, the driver goes as slowly as possible, starting and stopping the engine  about 20 times during a race.

Gold Lightning raced successfully but experienced an issue with the new electronic fuel-injection system the team developed this year.

Despite some  problems at  both competitions,  Dr. Larry Zavodney, senior professor of mechanical engineering, said he was proud of the students’ diligent work and quick thinking to find solutions. Even though the competitions are at times tense, the students do take time to enjoy the event. For example, at the SAE competition  in Michigan, the team started a new tradition— “baptizing” the next year’s team leader in the hotel swimming pool.

In addition to successful race results, the 2009–10 team accomplished some notable milestones and improvements to the Supermileage vehicles. These include extensive dyno testing and data reduction, a new rear chassis for Gold Lightning, a rear wheel that has an eight-speed internal gear-hub transmission, a new on-board computer, software upgrades, and a wireless communication system, which is connected to a computer in the command center.

The team’s new electronic fuel-injection system includes a new throttle body design. This will allow the computer to eventually take over control and drive the car. The student team spent countless hours programming the fuel map and then performing extensive tests.

In September, SAE’s  Momentum magazine cover featured Cedarville’s Slipstream Supermileage car going through a tech inspection. This was the first time the Cedarville team has been featured on the cover of the magazine. For more information, including pictures and stories, visit the team’s website at jeremiah.cedarville.edu/Supermileage. 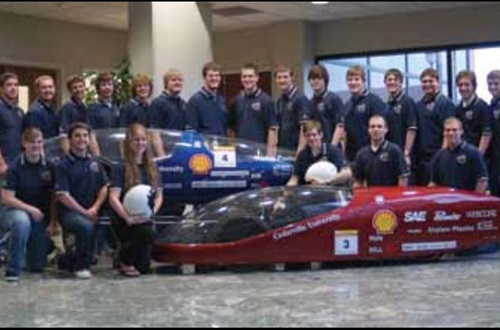