Roscoe Smith, associate vice president of university admissions, said that from late October to December, Cedarville received a lower-than-expected number of applications. In order to increase applicants, Cedarville adopted a new strategy that has generated a significant amount of applications.

“It’s not unusual for applications to slow down at this time of the year,” said Smith. “But in the last 30 days, we have seen a significant increase, and that’s largely due to our partnership with a third-party vendor.”

Smith noted that between February 16 and March 15, Cedarville received 157 new applications, compared to just 69 applications during the same time period last year. As a result of the recent surge, Cedarville’s admissions leadership team is optimistic it will achieve its goal of 815 new freshmen students for fall 2015. Last year 787 freshmen enrolled, so if Cedarville achieves its goal, the increase will be substantial.

“There are many reasons to be optimistic about what is happening at Cedarville University, and the potential of bringing in 815 students is one of those reasons,” said Smith, now in his 26th year in admissions leadership with the university. “When you see 100 percent placement among the class of 2014 in 58 of our 71 majors, and us being nationally ranked by U.S. News and World Report and Washington Monthly, it’s easy to be excited. Clearly, the surge is providing our staff with great energy and encouragement because they’re working very hard.”

Cedarville University is still accepting applications for fall 2015. For more information on applying to Cedarville, call 1-800-CEDARVILLE or visit: https://www.cedarville.edu/Admissions. 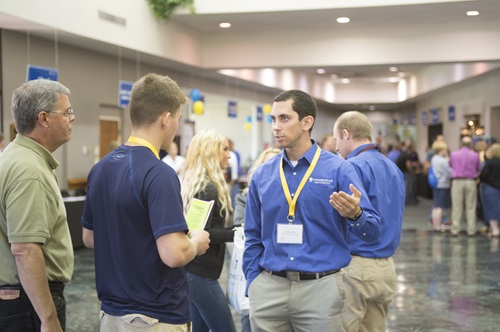 Cedarville University is experiencing an increase in prospective student applications.