Cedarville has been attending this conference — known to be the highest level of intercollegiate Model United Nations competitions in the country — for five years.  More than 3,000 students from 250-plus universities from across the nation and around the world participate. In addition to the team honor, six of Cedarville’s 16 students gained individual honors. The individual honors were divided up into three teams. Each team was to prepare a paper that focused on a topic specific to its committee. While every participant at the conference submits a paper, only the top submissions are recognized.

To receive an individual award, all team members must submit a position paper prior to the conference. These papers are judged on the level of analysis, research and accuracy on representing the team’s assigned country. Team awards, however, are based on the quality of every member’s performance at the competition.

“To get into the highest level, a delegation must have all team members giving standout effort within their respective committees,” Carson Doyle, team co-captain and senior business management major from North Rose, New York, said. “In a crowd of almost 400 people, you have to come across as one of the most competent, diplomatic leaders to be recognized.”

The team advisor is Frank Jenista, Ph. D., who was a diplomat for 25 years before returning to Cedarville University as professor of international studies.

Each year at this competition, the Model U.N. teams represent a country, and this year Cedarville was assigned Mongolia. Then, the teams participate in a mock negotiation as a delegate for their country. Teams are responsible for knowing their countries policies on the specific topic of research, the country’s voting records and U.N. voting records, with hopes to form allies. The competition begins in the morning and can go until late at night – and continues for four days.

Kelly Parliament, team co-captain and senior international studies major from Wixom, Michigan, had the opportunity to walk around some of the committees and watch her team’s performance. Parliament said she was genuinely pleased by her team’s work ethic and the way they represented Cedarville University.

“We put Cedarville's name out there at a national conference with hundreds of schools from quite literally all over the world,” Parliament said. “We have upheld Cedarville's record of excellence and represented the university well.” 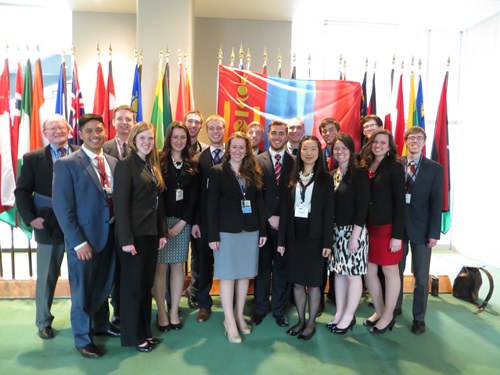