Thursday, April 16, 2015
For the first time in Cedarville University history, a student has been awarded the prestigious Fulbright Scholarship. Katie Goehring, a senior from Reynoldsburg, Ohio, was named a Fulbright Scholar for 2015-16 and will study in Germany along with 139 other recent college graduates. Goehring will live and work in Hessen from June 2015 until August 2016.

With the honor, Goehring joins Andrew Wiseman, Ph.D., professor of Spanish, as the only Fulbright Scholars connected with Cedarville University. Wiseman was awarded his scholarship as a Cedarville faculty member in 2004 and taught English and Spanish at a university in Tashkent, Uzbekistan.

“Kathryn is an excellent example of a Cedarville student prepared to take on the world; she has a deep desire to understand and help others,” said Wiseman. “This is a huge academic honor for her that will open up many doors in the future.”

The Fulbright Scholar program, managed by the U.S. Department of State, is awarded to the brightest academic scholars. Fulbright alumni include Nobel Peace Prize recipients, Pulitzer Prize winners, scientists and civic leaders. Goehring is majoring in Christian education and youth ministries, and she has minors in Bible and German.

The honor has left the soon-to-be Cedarville graduate humbled.

“It’s kind of intimidating because as I started researching the Fulbright Scholar program, I came away in awe of the type of people who’ve been recognized,” said Goehring. “I saw people who attended Harvard or have degrees in German from Harvard or Cambridge or all these really intense credentials.”

Goehring credits this honor to her teaching experience in Hungary and God’s faithfulness.

“This honor clearly is an example of God working and giving me this opportunity,” said Goehring. “I do not believe I have the same credentials as past recipients, but I am very thankful for this opportunity and will do all I can to maximize the learning experience.”

While in Germany, Goehring will be an English teaching assistant. She will use this position to help students learn, and improve their English, while also getting involved in the local community. She’ll also serve as a cultural ambassador for the United States.

“They (the Fulbright program) give me a stipend and they give me a plane ticket, but from there it’s a lot of independence. There’s no one checking over your lessons or looking over your shoulder,” she said. “I’m hoping that this experience will teach me what living and working abroad really looks like.”

At Cedarville, Goehring is the president of the German Club and is a member of the speech team. In addition, she studied abroad in Germany and has gone on two short missions trip to Hungary to teach English. She said that she wants to be open for opportunities for ministry while she is participating in the Fulbright program and is considering becoming a Teaching English to Speakers of Other Languages (TESOL)  teacher after the her Fulbright Teaching English Assistantship is over.

“My education at Cedarville has broadened my perspective on ministry,” said Goehring. “I’ve learned that to be really effective in ministry, I need to be interacting with people and the Fulbright Scholar experience will help me begin this process.” 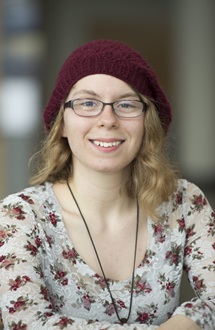 Katie Goehring, a senior from Reynoldsburg, Ohio, was named a Fulbright Scholar for 2015-16.