Wednesday, April 8, 2015
For sports enthusiasts, working at ESPN is a dream job. For Paul Hembekides, a 2012 graduate of Cedarville University, he’s living that dream as a production researcher for the national radio and television program “Mike & Mike.”

“I was planning on continuing my career in university athletics somewhere or as a high school athletic director, but God had other plans and He opened up the door at ESPN,” said Hembekides. “It’s funny how that worked out, and I wasn’t going to turn down the opportunity as a lifelong sports fan.”

Hembekides began his career with ESPN in July 2014 as a Sports Center researcher. Six months later, after a key member of the “Mike & Mike” research team accepted another job, he moved into the researcher’s role for the morning program based in Bristol, Connecticut.

“Mike & Mike” began airing in 2000 with co-hosts Mike Greenberg and Mike Golic. Since its founding, the program was turned into a television show in 2004 and is available on ESPN Radio and ESPN2.

Hembekides said working the morning show is a different lifestyle, but it is well worth the early wake-up time. “I am working from three in the morning to noon, essentially,” said Hembekides. “But because I love this position so much, and I love working with the show group, it has been worth it.”

The position with ESPN is a perfect fit for the comprehensive communication major and former Yellow Jacket baseball player.

Given the nickname “Hembo” by the co-hosts and other staffers, Hembekides has become a natural for his new position — and very much appreciated by Greenberg and Golic.

“Hembo has stepped right into the middle of our show, put his feet up on the desk and made himself comfortable. It's as though he's been with us for years,” said Greenberg. “He has a great understanding of what we need from him, where we're going and how to best illustrate our subject matter with statistical material. What he needs is a better nickname. We're still working on that.”


But “Hembo” is quick to point out how his love for sports journalism was enhanced while at Cedarville University.

“The people at Cedarville had a lot to do with where I am now,” said Hembekides. “Mark Womack, Jim Clark, Jim Phipps and Jeff Gilbert all either mentored me, let me write for them or gave me internship opportunities. Those opportunities piqued my interest in the field. I’m also very appreciative of [head baseball coach] Mike Manes for giving me the opportunity to play. I hope that someday I can help young people like they helped me.”

After graduating from Cedarville, Hembekides pursued a master’s degree in education from La Salle University in Philadelphia. He also was a graduate assistant in La Salle’s sports information office. For Hembekides, thinking he would be a teacher or athletic director, it made perfect sense to earn the master’s degree while staying in the sports world.

His academic decisions and internship opportunities have proven to be wise endeavors. Now Hembekides spends each day on the cutting edge of the national sports scene. He is responsible for creating full-screen graphics and compiling research for “Mike & Mike,” which includes statistics, historical information and context for daily discussion.

“I try to make the listener smarter by providing insightful, timely information,” said Hembekides. “There’s no cookie cutter way to do my job, but if Mike and Mike are talking about a topic, I try to inject ideas for enhanced storytelling.” 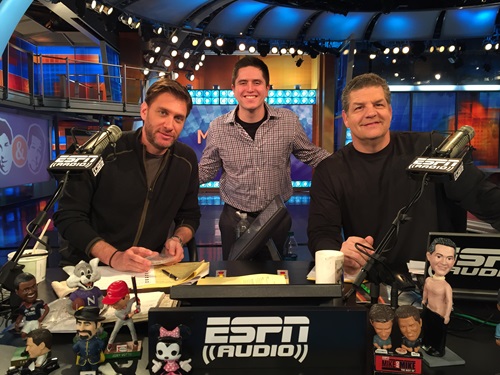