One of the teams from Cedarville (Kevin Bridgman, a junior from Cedarville, Ohio; Matthew Paulding, a junior from San Antonio, Texas, Amy Abraham, a junior from Springfield, Ohio; and David Tibbetts, a sophomore from Olympia, Washington) won a gold medal in the Robot Construction. In this category, team members designed a robot — Cedar-Crab — to complete a specific challenge they had chosen — the Fishing Derby.

As part of the challenge, the robot had to collect, detect and then drop as many fish cutouts as possible into their corresponding color tanks within 120 seconds. The team will use this design to complete the same challenge in the American Society for Engineering Education (ASEE) competition on June 15, which will be held in Seattle, Washington.

In addition to the gold award, the team earned the Honda Innovation Award for its category. This honor was given to only 13 of the 405 entries in the competition.

In this category, students designed an autonomous vehicle to complete an outdoor obstacle course.

“Both of our Cedarville University teams were able to take skills learned in the classroom and apply them to these challenging real-world problems,” said Clinton Kohl, Ph.D., professor of computer engineering and adviser of the teams. 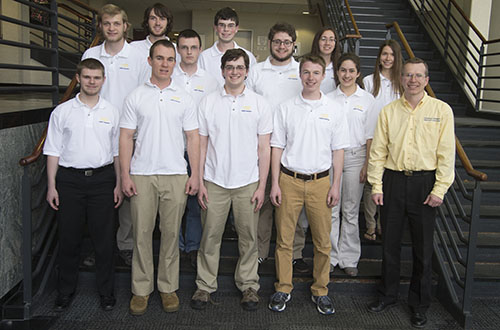