Saturday, June 27, 2015
Processing college applications is often accompanied by sorting through a seemingly endless mountain of paperwork. Traditional paper applications don’t just put a strain on resources; they can also cause many inefficiencies that significantly slow the admissions process.

But enrollment services at Cedarville University implemented a solution that's been fully operational for one year – it’s gone paperless. Becky Hayes, director of enrollment services, and Tammy Abel, assistant director of applications management, led the transition to the paperless application process. As a result, the university has saved thousands of dollars and a reduced the time it takes a student to move from the application stage to being admitted.

Over the past five years, Cedarville University has processed nearly 20,000 applications and approximately 95 percent those were paper. With multiple pages in each application packet, printing and staff costs were increasing each year.

“When the applications team merged into our office four years ago, one of the things I noticed right away was the increase in the amount of paper and toner we were using,” said Hayes. “It was expensive and inefficient, and we realized that moving toward a paperless system would save time and money.”

Since moving to an all paperless system in August 2014, the enrollment services team has yet to process a single paper application. With 3,793 applications processed to date under the new system, it’s already made a huge difference.

“We no longer have our printers tied up every morning or the expense of having to purchase folders and labels to create files for each applicant,” said Hayes. “The cost savings is great, but the biggest advantage is that it’s freed up our staff to better support the admissions team and, ultimately, better serve applicants.”

The old system wasn’t just a strain on budget and time, but it also caused headaches when sending application packets to others on campus who need to review application files.

“We have admissions file reviewers all over campus,” said Abel. “Transporting paper folders full of loose paper across campus was a nightmare. We always worried about losing pieces.”

In order to alleviate the stress caused by moving multiple stacks of paper around campus, the enrollment services team worked with Cedarville’s information technology staff to identify the best way to share and store files electronically.

“About three years ago, our IT department found a company called FileBound, which offers a system for scanning, filing and routing documents to the right place,” said Abel. “Now we can route completed electronic files all around campus with no fear of losing pages.”

“We want to provide the best service possible, as quickly as possible” said Hayes. “By eliminating several steps in the process and routing files electronically to the admissions team, they are better able to answer questions in a timely manner if a student calls with a question.” 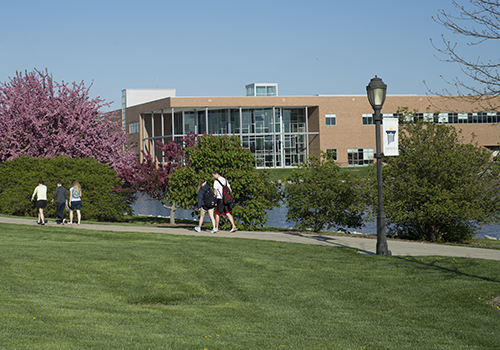