Thursday, February 12, 2015
A two-year old boy, laying lifeless in his mother’s arms, gets handed to you. How would you respond?

Joshua Arnold, a third-year professional pharmacy student, was put in that situation on Friday, Jan. 30, when his neighbor pounded on his door fearing her two-year-old son was going to die. Arnold’s textbook approach led to a positive end to the emergency.

“I give God all of the praise for allowing Joziah to still be alive; I did what anyone would do,”said Arnold during television interviews with Dayton media. “I was just a tool that God used.”

Arnold wasn’t scheduled to be home; rather, he was to be working at his internship at Kettering Medical Center in Kettering. But his shift ended early and he returned home for a casual afternoon. He even started cooking dinner.

That’s when the sound of pounding on his front door took place. In came Damaris Pearson and her unconscious, non-breathing son. “Please help Joziah; he’s dying,” she said.

Arnold stopped his cooking and immediately applied CPR to the toddler — skills that he gained from a mandatory course in the school of pharmacy. “I was asking myself [when I was taking the class], ‘Why is this class necessary for a pharmacist?’ Now I know. It’s valuable for a pharmacist or for someone who is just cooking dinner. It helped make a positive difference in this situation.”

While Arnold started performing CPR, he instructed Pearson to use his cellphone to call 911. In a matter of minutes, Cedarville’s emergency unit arrived. Prior to their arrival, the toddler began breathing again.

“I am thankful for the training Cedarville [school of pharmacy] has provided me,” said Arnold.  “This unfortunate event allowed me to realize that I am being prepared for these kinds of real-life situations.”

“Joshua [Arnold] remained calm throughout the ordeal, and I believe that it was because of his quick thinking and accurate recollection of his training that my son is alive today,” said Joshua Pearson, father of the boy who was not home at the time of the crisis. “We are eternally grateful for the Lord’s provision.”

According to medical doctors at Soin, Joziah had a virus which caused his temperature to spike, resulting in a febrile seizure. Today, the toddler is living a normal life and is enjoying his stuffed animal that he received on his ambulance ride to Soin.

“Joziah is doing fine but there was a time that we thought we were going to lose him,” said his mother, Damaris, with a tear in her eye. “It has definitely brought our priorities into perspective. We are so thankful for Josh Arnold and for the university training.” 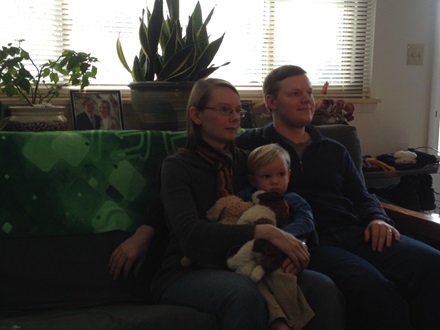 Joshua Arnold, a professional pharmacy student was called upon by Damaris and Joshua Pearson (pictured above) to help save the life of their son.