Just a Normal Day: Flying at 7Gs with the Air Force

When Jonathan Case declared graphic design as his major during his junior year at Cedarville University, he figured he’d work at a graphic design firm in his home state of California following graduation.

“I came to Cedarville not really knowing where I would end up or what I’d ultimately be doing after graduation,” he recalls. “Once I started down the path of graphic design, my heart was kind of set on designing graphics for surfboards and snowboards.”

He had no idea his path would lead him into the cockpit of a U.S. Air Force F-16 fighter jet, taking photos and video during test runs of the F-22 and F-35 aircraft as part of a joint effort by the Air Force and defense industry giant Lockheed Martin.

“My first flight was the craziest,” he recalls. “It was a test mission that required a safety chase, which basically means we fly extremely close to the other aircraft to relay information regarding its exterior. We got right up under the F-35 to make sure nothing was out of the ordinary and afterward, even got to do an aerial refuel with a tanker plane.”

While his first flight will always hold a special place in his memory, Case also said there have been many other thrilling rides in the F-16.


“After spending one afternoon making passes by Mount  Whitney, the pilot asked me if there was anything I’d like to do in the jet that I hadn’t already done,” said Case. “I told him I’d never been supersonic yet, so he got the clearance to do that. Just knowing that you’re traveling close to 1,000 miles per hour is pretty surreal.”

Even when a mission is canceled  for the day due to weather or another circumstance, there’s still time for thrill rides.

“Just last week we were getting ready to taxi out to chase an F-35 when the mission was canceled,” said Case. “The pilot contacted the operations desk to ask if we could take a proficiency flight and requested an unrestricted climb. We made a 7G turn straight up. It’s like no roller coaster imaginable.”

Just for comparison’s sake, the 7G turn Cases experienced is just slightly less g-force than the Apollo 16 experienced on reentry to the earth’s atmosphere in 1972.
“I had always been immersed in aviation as a kid and was quite interested in it,” he said. “When I saw that Lockheed Martin was looking for a graphic designer, I couldn’t have been happier with the prospect.”

During his first six-plus years with Lockheed Martin, Case worked on a variety of projects from brochure and logo design to trade show displays and decals for jets.

But photography work was never far from his mind, especially after developing a passion for it after taking a photography class at Cedarville.

“I had always viewed photography as being closely related to graphic design as far as looking at the relationship of color and composition and had thought about eventually trying to work my way into photography,” he said.

The opportunity to do photography on a full-time basis came when Lockheed Martin needed a media aircrew analyst at Edwards Air Force Base, just 36 miles north of Palmdale.

A media aircrew analyst takes still photos and video of jets in flight, while also taking photos of parts on the ground so the Air Force can document the performance of the aircraft and see any potential problems.

Case had previously applied for a similar position at another location, but hadn’t been selected.

“At the time, they felt that I wasn’t fully prepared,” he said. “But that’s what really encouraged me to hone my skills in photography and videography. I took it upon myself to build upon the fundamentals I had learned through the years.”

But on his second try, Case was fully prepared and ready for the challenge.

“I was able to put together another demo reel and show them my improvements in all areas,” he said. “I integrated my work with motion graphics and the design skills I had been honing since attending Cedarville. They came away impressed by the work and with the fact that I had demonstrated a strong passion and desire by taking it on myself to step up my game.”

After finishing the interview and completing an extensive government background check, Case was offered the media aircrew analyst position and now spends his days mere feet from other jets as he records the test runs.

But despite all the thrills, the high speeds and the unique views he sees on a daily basis, Case credits his time at Cedarville with preparing him for his career.

“I had never been around so many talented and creative people before I came to Cedarville,” he said. “I think what really prepared and motivated me was having faculty that communicated the importance and breadth of the arts. I was prepared with a strong sense of purpose in being a Christian involved in the arts. Approaching the job with a thirst for excellence was fundamentally instilled in my education.”

Located in southwest Ohio, Cedarville is an accredited, Christ-centered, Baptist institution with an enrollment of 3,620 undergraduate, graduate and online students in more than 100 areas of study. Founded in 1887, Cedarville is recognized nationally for its authentic Christian community, rigorous academic programs, strong graduation and retention rates, accredited professional and health science offerings and leading student satisfaction ratings 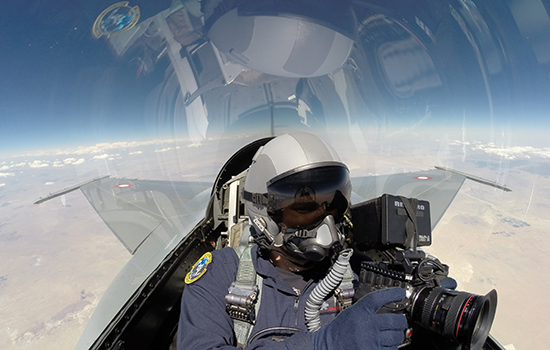 Jonathan Case, a 2007 Cedarville University graduate, serves as a media aircrew analyst for Lockheed Martin in its work with the United States Air Force.