Author Shares a Story of Hope in Jesus

Tuesday, February 10, 2015
Bob Mortimer, a three-limb amputee and the author of “Hope and Courage Across America” has been speaking at area high schools throughout the Miami Valley since February 6 and he will conclude his tour on February 12 at Cedarville University. His presentation begins at 10 am in the Dixon Ministry Center.

"Bob has a great story to share and he’s a gifted speaker,” said Greg Dyson, director of intercultural leadership at Cedarville University. “I’m confident Bob will be an inspiration to those who listen to him.”

Mortimer lost his left arm and both legs when he was 21 due to a car accident caused by his being impaired due to drugs and alcohol.

Late one evening, while heading home from a local tavern, Mortimer and his brother, Tom, decided to drive on a back road to avoid getting pulled over for drunk-driving. Quickly, after the right tire unexpectedly ran off the road, Tom swerved across the highway and down a hill slamming into a utility pole. Suffering minor injuries, then walking back to the highway, both encountered what they thought was a wire fence, which in reality was the live power lines that had fallen from impact to the pole. Mortimer walked into the 12,000 volt live wires, leaving him unable to move.

Since then, Mortimer has committed himself to staying drug (and alcohol) free. He tells his story of hope for individuals damaged by alcohol and drug use.

Mortimer and his family have shared their story across the United States, Ecuador and Costa Rica, at times with audiences of more than 40,000. His family completed two bike rides across America, one in 2008, which is the inspiration for “Hope and Courage Across America,” and another in 2011, each covering about 2,500 miles.

“Life’s journey has huge mountains and long roads. We all face them. We need courage to take the next step or to go one more mile in spite of our wounds and challenges—daring to do great things with our lives. The only handicap is the one you put on yourself,” says Mortimer. 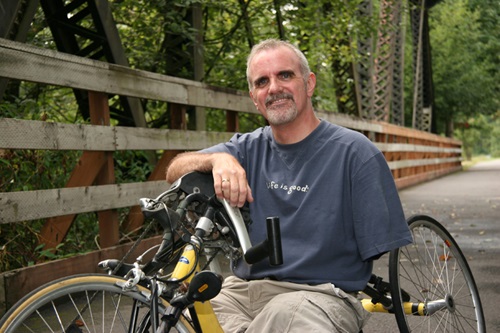 Bob Mortimer, a three-limb amputee and the author of “Hope and Courage Across America” will speak at Cedarville University on Feb. 12.