Monday, January 19, 2015
Jay Kinsinger, assistant professor of mechanical engineering at Cedarville University, received four awards at the Artistry in Wood Show in Dayton in November 2014. The Dayton Carver’s Guild sponsors this event annually, and it is one of the largest woodworking shows in the nation.

Kinsinger was awarded Best in Category, First in Woodworking, and Best of Show by the Artistry in Wood judges for his wooden bicycle. The Western Ohio Woodworking Club also awarded him Best Floor Standing. Kinsinger has combined his passion for bicycling, woodworking and teaching to create several wooden bicycles and teach others how to make them as well.

Kinsinger has been involved in woodworking and building steel bicycle frames for many years. “My favorite definition of creativity is: the putting together of two previously unrelated things, objects or ideas and making something new. I love bicycles and I love woodworking.”

After a failed attempt and hundreds of hours of labor, he finished his first model in the winter of 2011. He then made an entire fleet of six wooden bikes that fold up to fit inside of a suitcase for easy travel. Kinsinger took his family of six to Europe for a cycling tour that same year.

In November 2011, he entered his first wooden bicycle in the Artistry in Wood judging. Kinsinger walked away with three blue ribbons: Best of Category, Best of Class, and Second Best of Show.

“The recognition I’ve received for my bicycles has been encouraging and at the same time very humbling. Craftsmanship and creativity is a way in which I can express worship,” said Kinsinger. 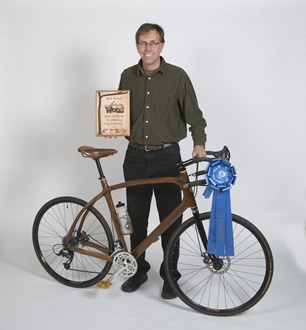 Jay Kinsinger, assistant professor of mechanical engineering at Cedarville University, received four awards at the Artistry in Wood Show in Dayton in November 2014.