Professors Awarded for "Excellence in Education"

Monday, November 24, 2014
Cedarville University professors Rocco Rotello, Ph.D., associate professor of pharmaceutical sciences, and Mark Caleb Smith, Ph.D., associate professor of political science, have been recognized for their “Excellence in Education”  in the Ohio Magazine December 2014 issue. Ohio Magazine recognizes professors for achievements in research and their impact in higher education instruction.  Professors are nominated by their respective universities and chosen by a panel from the magazine.

Rotello has conducted research, in partnership with Aerpio Therapeutics in Blue Ash, Ohio. He has developed a patent for an antibody that stimulates blood-vessel growth and developed a novel biological approach to stabilize blood vessels. These accomplishments afford Cedarville's school of pharmacy significant credibility among other pharmacy schools. Rotello is spearheading a successful research program, required within the school’s curriculum, and has developed mentoring relationships with many of the pharmacy students.

Smith is the director of the center for political studies at Cedarville. He has developed a number of extracurricular learning opportunities for students studying political science, history and government, one being a semester studying in Washington, D.C. that provides students with unparalleled opportunities. The opportunity has inspired students to be a positive force in the political realm and has launched several careers in the nation’s capital. Smith has also initiated a scholars program, through the center for political studies, which allows students to partner with professors conducting research. Repeatedly, Smith has received outstanding student evaluations and has earned many academic enrichment awards.

“The department of history and government is particularly pleased to see Dr. Mark C. Smith honored in Ohio Magazine for his excellence both inside and outside of the classroom,” said Thomas Mach, Ph.D., dean of the department of history and government. “Cedarville is very blessed to have him here, for he has helped poise the university to be a leader among Christian institutions of higher learning in the areas of political and cultural engagement.” 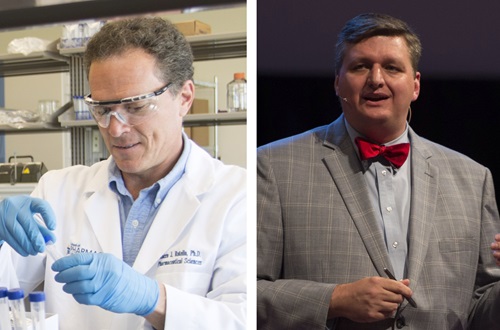 Professors Rocco Rotello (left) and Mark Caleb Smith (right) have been recognized for their “Excellence in Education” in the Ohio Magazine December 2014 issue.