Friday, June 19, 2015
Leadership is a character trait that can take years to develop, something that Lt. Gen., USAF (Ret.) Loren Reno knows well.

A 38-year veteran of the United States Air Force and the current interim vice president for academics at Cedarville University, Reno is passionate about helping mold the future leaders of the world.

So, naturally, he decided it was time to put pen to paper and write a book about the countless lessons in leadership he learned during nearly four decades with the military.


“There are thousands of books out there about leadership,” said Reno. “But I wanted to write one that focused on how someone can lead by serving, which God commands us to do in the Scriptures.”

Reno’s book, titled “10 Leadership Maneuvers: A General’s Guide to Serving and Leading,” takes many of the lessons in leadership he learned from his decorated military career and combines them with Scripture to provide a leadership plan grounded in biblical truth.

“I was fortunate during my career to get great insight into what worked and what didn’t when it came to leadership,” said Reno. “I learned that leaders should have integrity in speech, action and thought; that service to others should be the foundation for leadership; and that humility is essential in a leader’s role in serving.”

The book also contains some of Reno’s favorite stories from his Air Force career, which he says add context and enjoyment for the reader.

“People love to hear the war stories,” he said. “They’re woven throughout the book as a way to better illustrate the message I’m trying to convey. The entire work is really more of a storybook whose theme is how to be a successful leader.”

The book, which is being published by Deep River Books, is set to be released on July 2 and can be purchased at the Cedarville bookstore or online through Amazon.com.

The release of the book marks the culmination of almost two decades of work on the part of Reno, who said the task was far from easy.

“I’ve really been preparing for this book for the better part of 20 years,” he said. “In the summer of 2013, I finally took a month off, secluded myself and began writing. My hope is that I can show people that leadership based on humility and service can be successful and that it’s in line with God’s word.” 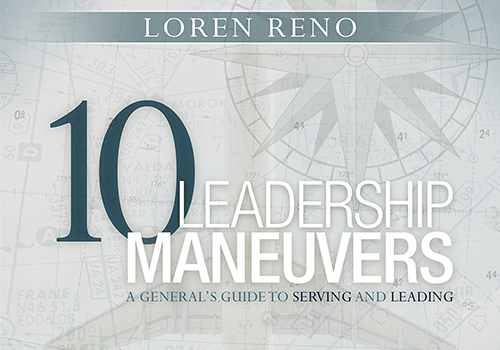 Lt. Gen., USAF (Ret.) Loren Reno has written a book about leadership based on his 38 years in the United States Air Force.