Tuesday, June 23, 2015
A team of freshmen and sophomore engineering students from Cedarville University completed a three-peat in the Autonomous Robotics Competition at the American Society of Engineering Education (ASEE) Conference in Seattle this week.

Cedarville’s robot, named Hermit, earned 291.51 points to finish well ahead of second-place Monroe Community College, which recorded 226.63 points. The championship is the third-straight for Cedarville, which won the competition in Atlanta in 2013 and Indianapolis last year.

The competition requires teams to build and program a robot to complete a specific task. Teams were awarded points based on both their robot’s performance and a poster presentation, which describes the details of their project.

“This year was the most challenging competition yet,” said Clinton Kohl, Ph.D., professor of computer engineering and the team’s faculty adviser. “Only two of the 15 teams at the competition fully completed the task and even though we won the title, our robot fully succeeded on just one of the four attempts that each team was given.”

In fact, Cedarville’s only fully successful run came during the competition, despite having numerous test runs leading up to it.

Cedarville’s team earned points on its first and fourth attempts and nearly scored in the second and third rounds as well.

“God was very gracious to us and the students worked extremely hard to overcome some last-minute failures which included a broken sensor board and a failed power connection,” said Kohl. “The students were able to troubleshoot the issues and come up with solutions to get the robot working correctly.”

During the competition, Cedarville earned the highest testing score (185.55) and finished second in the exhibit score (105.96).

“Our success in the competition is a great recruitment tool for the engineering program,” said Kohl. “A lot of prospective students participate in these competitions in high school, so for them to get a chance to do this as a freshman or sophomore at Cedarville is very special.” 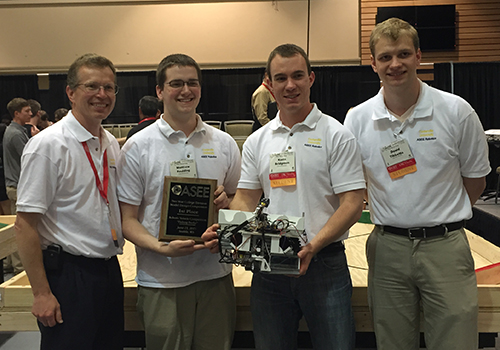