This agreement will continue in 2015, with Allison White of Cypress Christian School in Houston, Texas, and Nathan Robertson from Whitefield Academy in Louisville, Kentucky, receiving the prestigious scholarships. The recipients will be on campus April 20 and will join Dr. Thomas White, Cedarville’s president, for a midday ceremony and luncheon.

Allison White intends to study business administration management and wants to work in human resources. Aside from the SBACS scholarship, she has also received the Association of Christian Schools International (ACSI) Distinguished Student Award for Leadership, Fine Arts and Christian Service. She is also the recipient of the 2014-2015 Daughters of the American Revolution Good Citizen award and scholarship.

Robertson plans to study broadcasting and digital media, saying, “I'm a huge movie buff, so I'd really love to learn how the whole process of making something like that works.”

During high school, Robertson participated in many extracurricular activities including varsity soccer, drama (eight plays), beta club, student government and was also a Fellowship of Christian Athletes Chaplain, a student leader on the Title IX Athletic Advisory Board, and a leader on his school’s athletic council. He was also included in the Louisville Business First Magazine honors list and named to the Kentucky High School Athletic Association (KHSAA) all academic first team.

Cedarville University and SABCS have witnessed a disconnect in high school students completing a Christian education and pursuing a degree at a rigorous, Christ-centered university.

High school seniors from SBACS-accredited schools who have gained admission to Cedarville University are eligible to apply. The two competitive scholarships consider ACT and SAT scores, extracurricular activities and include five brief essays describing the student and the importance of Christ-centered education and its effect on his or her future career. The scholarship attaches to each student’s Cedarville academic scholarship to fully cover tuition expenses for a total of eight fall and spring semesters.

The conglomerate between SBACS and Cedarville’s school of education furthers through Cedarville’s online Master of Education degree. If identified as a member of the SBACS cohort, there is a 25 percent tuition reduction to the cost of the all-online program.

To learn more about the SBACS Online M.Ed cohort go to: http://www.cedarville.edu/Graduate/Master-of-Education/SBACS-MEd.aspx 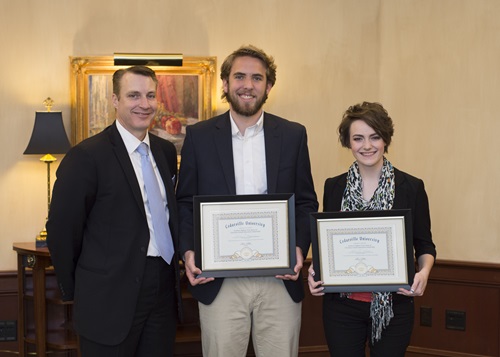