Wednesday, May 6, 2015
As the first student from Cedarville University to be selected for the prestigious Carl F. Emswiller Internship, second-year professional pharmacy student Jordan Long will head to Washington, D.C., this summer to intern with the American Pharmacists Association (APhA).

“Not only is it a learning experience, but it is definitely an honor,” Long said. He is a double major, planning to complete his Doctor of Pharmacy in addition to a Master of Business Administration by 2017.

During the rigorous selection process, Long had to submit an essay, curriculum vitae, and letters of recommendation, as well as participate in an interview. Long’s interviewers reached a unanimous decision within a few days and selected him for this internship in association management.

Long was also elected as the president of the student chapter of APhA Academy of Student Pharmacists (APhA-ASP) for the coming year. Dr. Thaddeus Franz, assistant professor of pharmacy practice and co-advisor of APhA-ASP, was not surprised by Long’s achievements. “Jordan is a very personable, outgoing individual seeking to serve and be a servant leader within our school and broadly within our profession,” he said.

At APhA-ASP’s 2015 national meeting in San Diego, California, Cedarville’s student chapter was selected for the “Up and Coming Chapter” award. Franz said, “With many new schools of pharmacy, for us to be set apart was pretty huge,” explained Franz.

Two other students from Cedarville, Sarah Anderson and Heather Rose, were selected for month-long rotations as APhA interns this summer. 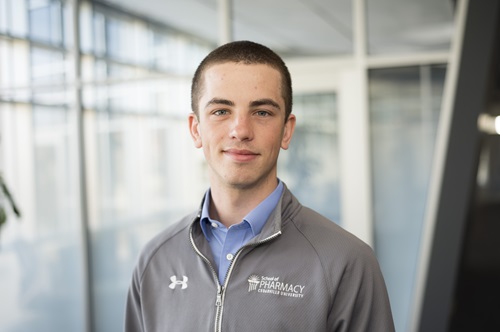 Jordan Long will head to Washington, D.C., this summer to intern with the American Pharmacists Association (APhA).