Makarios teaches students in pre-K through sixth grade in impoverished villages. “The school reaches out to help the students break the cycle of poverty through high-quality classroom instruction,” said Carissa Drum, director of the SGA philanthropy committee.

Sharla Megilligan, a 1997 Cedarville graduate, started Makarios in 2004. The school partners with Dominican Joe, a coffee shop owned by Megilligan, in Texas. Dominican Joe sells coffee from farmers in the Dominican Republic to raise money for the school.

The philanthropy committee’s goal is to raise $50,000 for six new classrooms for the school by the end of the school year. The school is at maximum capacity right now, so Makarios needs more classroom space in order to add a new grade next year to grow with the students.

During philanthropy week, many events were held at Cedarville University to raise student awareness about the work Makarios is doing in the Dominican Republic and to raise money for the school. The university’s coffee shop, Rinnova, began selling Dominican Joe coffee, while also selling donuts to raise money. Student leaders also played the documentary “Makarios: the Rising Tide,” showcased the purpose and mission of Makarios and held a prayer walk midweek. Cedarville students were also encouraged to write letters to the students at the Markarios School.

Cedarville students who took a trip to the Dominican Republic over fall break in October, shared their experiences from the trip during a special chapel program this week. Cedarville is planning another trip to the Makarios School for May 2015. 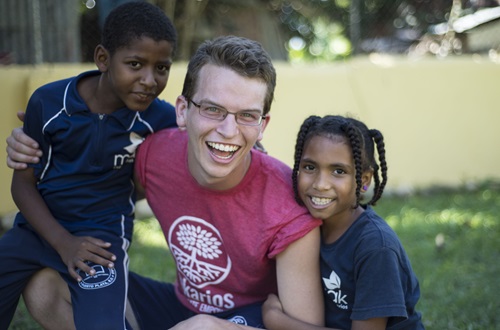 Cedarville University students raised $10,002 for Makarios, a nonprofit school in the Dominican Republic, during SGA’s week of awareness November 3-7.