As the dean of the school of business administration since 2012, Reno is credited for increased enrollment, high rates for career placement and the CPA exam. According to 2014 statistics provided by the office of career services, graduates from five business programs had a 100 percent placement within six months of graduation.  The CPA exam pass rate puts Cedarville University #25 in the nation and in the top 4 percent among all 776 universities with an accounting major.

“Gen. Reno is a godly, humble follower of Jesus who personifies Micah 6:8. I have the utmost confidence that he will lead our academic programs well,” said Dr. Thomas White, president of Cedarville University.

In 2015, Reno was inducted into the Association of Independent Colleges and Universities of Ohio “Award of Excellence” for his work in the military and recent tenure in higher education. He earned his undergraduate degree in comprehensive science and education from Cedarville before earning a master’s degree in systems management from the University of Southern California. Reno also completed graduate studies at Harvard University, Syracuse University, and the University of North Carolina. 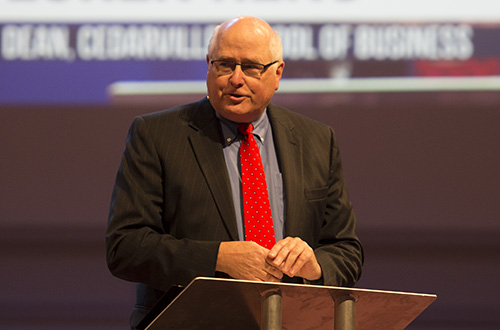 Lt. Gen. Loren Reno (Ret.), a 38-year veteran of the United States Air Force, has been appointed as the interim vice president for academics.