A Healing Touch from a Humble Man

Wednesday, September 16, 2015
It began with a series of headaches. It ended with two brain surgeries – the last of which was performed by world-famous surgeon and 2016 presidential candidate Dr. Ben Carson – and a new lease on life.

At age five, Adam Brandt, a 2012 Cedarville University graduate and current senior admissions counselor, began having a series of painful headaches. His family doctor thought it could be stress related or tied to some life-changing event.

But when one headache turned so painful that Adam began vomiting, his parents rushed him to the emergency room. A CT scan was taken and it showed a tumor in his cerebellum that was putting pressure on the brain and causing fluid to build up. It was a complete shock for the Brandts.

Understanding the seriousness of the situation, doctors performed surgery the next day to remove the tumor. They were fairly confident that, after removing the vast majority of the tumor, it wouldn’t grow back and the issue would be resolved. Within six months, however, the tumor had grown back.

“We knew at that point that we had to find a doctor who specialized in pediatric neurosurgery,” said Ruth Brandt, Adam’s mother.

That’s when an unexpected piece of mail arrived from Adam’s grandmother. Included in her letter was an article from U.S. News and World Report that profiled Carson and highlighted some of his surgeries on young patients.

“The article told the story of a boy, about the same age as Adam, who’d been operated on by Dr. Carson,” said Ruth. “It turned out the boy had a pilocytic astrocytoma, the same type of tumor as Adam’s.”

After much prayer and consideration, Adam’s parents decided to pursue Carson for Adam’s next surgery. They believed he was the right person to treat their 5-year-old son, so they collected and sent Adam’s medical records to Johns Hopkins, where Carson was practicing, for review.

Carson’s team reached out almost immediately, and Adam’s surgery was scheduled for early December, just a few days after Thanksgiving.

“I don’t remember a lot because I was so young,” said Adam. “But I do remember that Dr. Carson had a very calming demeanor. I only knew he was a big deal because my parents told me. But you would have never guessed that from how he interacted with us.”

Prior to entering the operating room, Carson asked if he could pray with the Brandts, something that he did with all his patients during his 30-plus years as one of the world’s top neurosurgeons.

“The one word that really described Dr. Carson was ‘humble’,” said Ruth. “This was a man who had done amazing things in his career, but he was so humble and kind; it gave us a huge sense of peace heading into the surgery.”

After nearly three hours of surgery, Carson had successfully removed the entire tumor, and Adam was on his way to the recovery room.

“We spent close to a week in recovery at the hospital before heading home to Florida,” said Ruth. “Once we got home, his recovery was fairly quick and he just went about being a normal 5-year old boy again.”

It’s been almost 20 years since Adam’s surgery, and he’s been able to live a normal life ever since, thanks to God’s provision and the work of Carson and his team.

“I remember Adam and I am so happy to hear that he is doing so well,” said Dr. Carson. “It was indeed a privilege to be able to intervene in his life and provide longevity and quality. It is equally gratifying to see him now using his God-given talents to encourage others."

“It’s crazy now to think that the guy who saved my life is running for president,” said Adam. “I’m just really thankful that God worked through Dr. Carson to heal me.”

"One of the many blessings of my life is to see the children I cared for become adults,” said Dr. Carson. “What greater reward could man receive than the joy of seeing your hard work doing so well.”

Brandt and Dr. Carson are expected to reconnect for the first time since the operation on Tuesday, Sept. 22 in the Dayton, Ohio region. Dr. Carson will be speaking at an evening event for Dayton Right to Life. 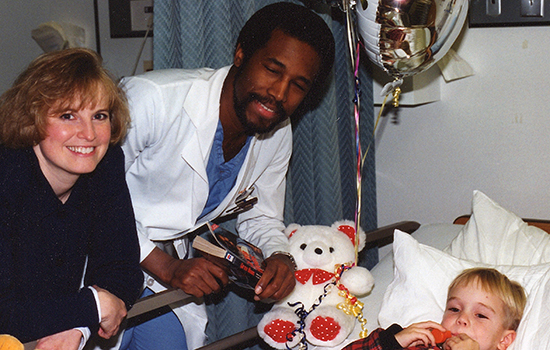