Friday, December 18, 2015
Cedarville University hasn’t fielded a football team for more than 60 years, but it has a chance to be a part of the world’s premier sporting event thanks to the work of 2014 graduate Parker Adams.

Adams entered the Doritos “Crash the Super Bowl” contest this year, and is one of 50 semifinalists still in the running to win the competition. His 30-second spot, “Have You Met Stacy?”, is currently the third-most watched and the sixth-highest rated among the semifinalists.

His commercial can move up in the ranks as more people watch and rate the video, which can be seen by visiting www.crashthesuperbowl.doritos.com/semi-finalists/views/0/3149.

The field will be narrowed to just three finalists in early January, and the winner will be selected via a fan vote that begins on January 5, 2016. In addition to a $1 million prize, the winning commercial will be featured during the 2016 Super Bowl.


All three finalists will be invited to travel to Levi’s Stadium in Santa Clara, California, the site of this year’s Super Bowl, to watch the game from a private suite.

Doritos began the contest during the Super Bowl in 2007, and announced in September that this season would mark the competition’s final year. 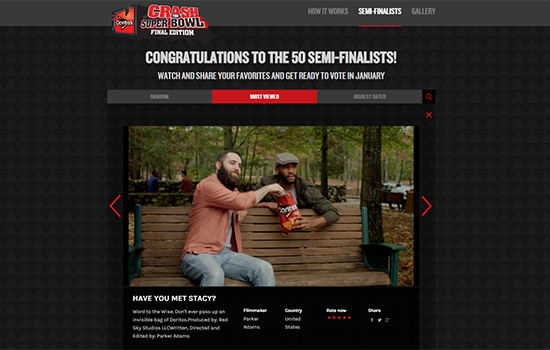 Parker Adams, a 2014 Cedarville graduate, is a semifinalist for the Doritos #CrashTheSuperBowl contest.