Wednesday, February 3, 2016
Cedarville University will continue a longstanding tradition of honoring area farmers and their families during its annual “Farmers Night” on Thursday, Feb. 11 in partnership with Raymond James Financial.

The farmers and their families will be treated to dinner and a special showing of the Emmy Award-winning documentary “The Great American Wheat Harvest” in the DeVries Theatre.

The documentary was produced and directed by 1988 Cedarville graduate Conrad Weaver and follows harvesters and their families as they trek across the country to harvest wheat. The film won a Midwest Regional Emmy in the “Best Documentary – Cultural” category last year.

“Farmers Night” is an invitation-only event that brings nearly 250 people to campus annually. In addition to area farmers and their families, businesses such as Tractor Supply Co., TruPointe and Rural King are also invited to attend.

The evening will begin with a country-style buffet prior to the screening of Weaver’s documentary. The event also includes messages from Cedarville president Thomas White, Ph.D., and Jeff Beste, director of alumni and parent engagement.

According to the Ohio Farm Bureau Federation, there are more than 75,000 farmers in Ohio, and more than 1,200 reside in Greene County. Ohio’s farming industry contributes more than $105 billion to the state’s economy each year and employs one in seven Ohioans directly or indirectly.

Cedarville’s annual Farmers Night was started by former president and current chancellor Paul Dixon, Ed.D., who realized the blessing that the farmers are to their communities.

“I had the vision to start Farmers Night because they are some of the finest people on earth,” said Dixon. “We are blessed by our Lord to have so many of them around Cedarville University.”

Amanda Gillispie, director of donor relations, scholarships and legacy gifts, is one member of Cedarville’s Advancement Division, which is responsible for organizing the event each year. Gillispie noted that there is a longstanding connection between area farmers and the University.

“We love having Farmers Night because our local farmers are our partners and our neighbors,” said Gillispie. “Many of these farmers have been deeply entrenched in the community for decades and they’ve seen Cedarville grow. We love inviting them to campus for an event like this.” 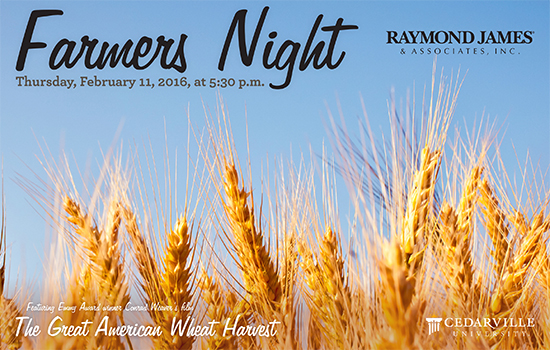 Cedarville will host its annual Farmers Night on Feb. 11.